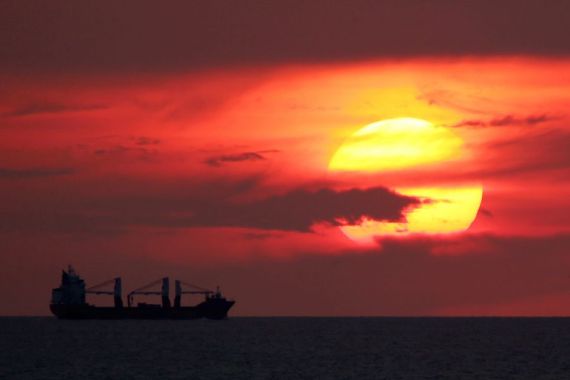 Photo taken aboard Xuelong on March 3, 2019 shows the evening glow before the China's research icebreaker crosses the equator on the Indian Ocean. (Xinhua/Liu Shiping)

“We rely on the oceans for food, livelihoods, transport, and trade. And, as the lungs of our planet and its largest carbon sink, the oceans play a vital role in regulating the global climate,” says Antonio Guterres.

(Xinhua) — United Nations Secretary-General Antonio Guterres on Monday urged governments to commit to the conservation and sustainability of the world’s oceans.

“I urge governments and all stakeholders to commit to the conservation and sustainability of the oceans through innovation and science,” Guterres said in his message for the World Oceans Day, an international day that takes place annually on June 8.

“As we work to end the pandemic and build back better, we have a once-in-a-generation opportunity — and responsibility — to correct our relationship with the natural world, including the world’s seas and oceans,” said the secretary-general.

Penguins are seen on floating ice near China’s polar icebreaker Xuelong 2, or Snow Dragon 2, in the Southern Ocean on Dec. 19, 2019. (Xinhua/Liu Shiping)

“We rely on the oceans for food, livelihoods, transport, and trade. And, as the lungs of our planet and its largest carbon sink, the oceans play a vital role in regulating the global climate,” he added.

“Today, sea levels are rising due to climate change, threatening lives and livelihoods in low-lying nations and coastal cities and communities around the world,” Guterres said, adding that “the oceans are becoming more acidic, putting marine biodiversity and essential food chains in jeopardy.”

“And plastic pollution is everywhere,” he noted.

The secretary-general said that  “on this World Oceans Day, we focus on Innovation for a Sustainable Ocean.”

“Better understanding of the oceans is essential for conserving fish stocks and discovering new products and medicines,” he added.

“The upcoming United Nations Decade of Ocean Science for Sustainable Development will provide impetus and a common framework for action,” said the UN chief.

World Oceans Day was officially recognized by the United Nations in 2008. The international day supports the implementation worldwide of the UN’s Sustainable Development Goals and fosters public interest in the management of the oceans and their resources.