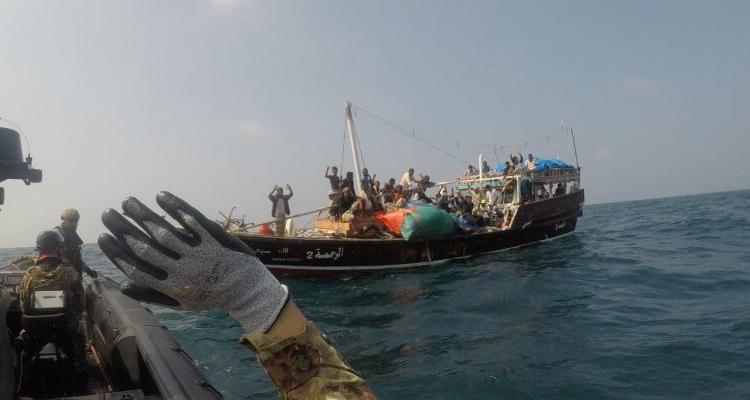 For the past 10 years the EU has successfully deployed a CSDP military naval operation to fight piracy off the coast of Somalia. Today the threat of piracy has been minimised. At the same time the operation was tasked with monitoring fishing activity and reporting any illegal activity. Improved security conditions now allow communities to engage in fishing activities supported by EU and UN missions and initiatives.

Piracy off the coast of Somalia developed as a serious threat to international shipping some ten years ago. At the same time, foreign ships took advantage of the absence of an effective national Somali coast guard to illegally exploit fishing grounds. Partly in reaction to declining fish stocks, local Somali communities in need of other sources of income formed armed groups to hijack commercial vessels. What started as a response against foreign vessels fishing in the waters of Somali artisanal fishermen quickly grew into an extremely lucrative trade due to the prospects of large ransom payments. At the height of the piracy crisis in January 2011, Somali pirates held 736 hostages and 32 ships. The EU’s and other maritime forces naval presence has helped to drastically reduce pirates’ attacks to just two unsuccessful attempts in 2018. However it also took action on the plundering of the seas off the Somali coast.

The waters of the Indian Ocean are rich fishing grounds but characterised by a low level of compliance with rules. Illegal, unreported and unregulated (IUU) fishing is known to be rampant. Illegal exploitation of the fisheries grounds deprives countries in the region of revenue from licences and undermines the very livelihood of the local fishing communities.

EU NAVFOR Atalanta has contributed to fighting piracy off the Somali coast. But monitoring of fishing activities is also part of its mandate. The operation gathers information on fishing activities that it shares with the Directorate-General for Maritime Affairs and Fisheries (DG MARE) of the European Commission, which analyses the data received and forwards it to relevant monitoring and conservation organisations such as the Indian Ocean Tuna Commission (IOTC).

This information-sharing mechanism has enabled investigations and prosecutions for illegal, unreported, and unregulated fishing activities as well as for other offences such as forced labour and human trafficking offences. While some investigations are still ongoing, others have already led to sanctions for the perpetrators.

This contributes to the EU’s wider efforts to prevent, deter and eliminate IUU fishing activities, to help local fishing communities and in particular to enhance maritime security off the Horn of Africa and in the Western Indian Ocean and protect human rights in the region. EU NAVFOR Atalanta is also expected to soon be able to transfer data on maritime crime to EUROPOL and INTERPOL, pending a Council decision on its mandate that will make the operation’s work even more effective in helping combat crime at sea.

Maritime security, monitoring of fishing and development of the Blue Economy are inextricably linked. Security is a prerequisite for sustainable development – a virtuous cycle where increased security allows for increased development leading in turn to  increased security and so on. In this context the EU’s 16 CSDP civilian and military missions and operations contribute to the EU’s so-called “Integrated Approach”. This means that different EU policy tools and instruments are deployed in a coordinated way and in close cooperation with all partners to achieve the best possible results. This is the European way of addressing crises.