Ritratto di Mario Botta, 2012
© Claude Dusset
From 25 March to 12 August 2018 the Pinacoteca Comunale Casa Rusca in Locarno will host one
review of the architectures of the sacred by Mario Botta.
“Mario Botta. Spazio Sacro “is an exhibition project curated by Mario Botta Architetti, with the scientific direction of Rudy Chiappini. After presenting internationally renowned artists (Valerio Adami, Fernando Botero, Hans Erni, Mimmo Rotella, Javier Marín and Robert Indiana), the Museum inaugurates the exhibition program of the 2018 with an exhibition dedicated to Mario Botta, extending its horizon of research and interest also to architecture.
The exhibition will take place in the rooms of the Pinacoteca and in the impressive pavilion built for
the opportunity in the external courtyard. For the first time ever, 22 architectures are presented
made in different countries: Switzerland, Italy, France, Israel, Ukraine, South Korea and China. It deals with 18 buildings, 3 works in progress and a proposal for a chapel at the airport of Malpensa. All projects are documented with original models, drawings and blow-ups.

The exhibition documents a typology dear to the architect Mario Botta who, in many years of activity, has had several opportunities to confront the dimension of the sacred, so as to come to affirm that “through the buildings of worship I have the impression of having identified the deep roots of the architecture itself. The concepts of gravity, threshold and light as the generatrix of space, the game

of the proportions and the rhythmic progress of the constructive elements, make the architect rediscover them primary reasons, of a somewhat sacred nature, of the architecture itself. “
The ability of the Swiss architect is indeed to develop an architectural language based on the study of primary forms, pure volumes, elementary geometry and natural materials.
An important challenge to win for Botta is to compete with the infinite through finite elements, figures
simple that are more easily distinguishable and in which all can be recognized.
The architecture of the sacred, in the creative path of Botta, starts from the need for an inherent spirituality man. Each of the 22 buildings, beyond the religious confessions to which they are intended (Judaism, Christianity and Islamism), stands as a paradigm of a way of interpreting it need, to give shape to the collective values ​​of our life, modeling light and space so as to draw from it a recognized and shared symbolic meaning. All this recovering the constructive tradition of the in particular, the use of bricks and stone, the latter often coming from localities where the architect implements his interventions, with this aim also pursuing the goal of contextualize their architectures respecting the genius loci. 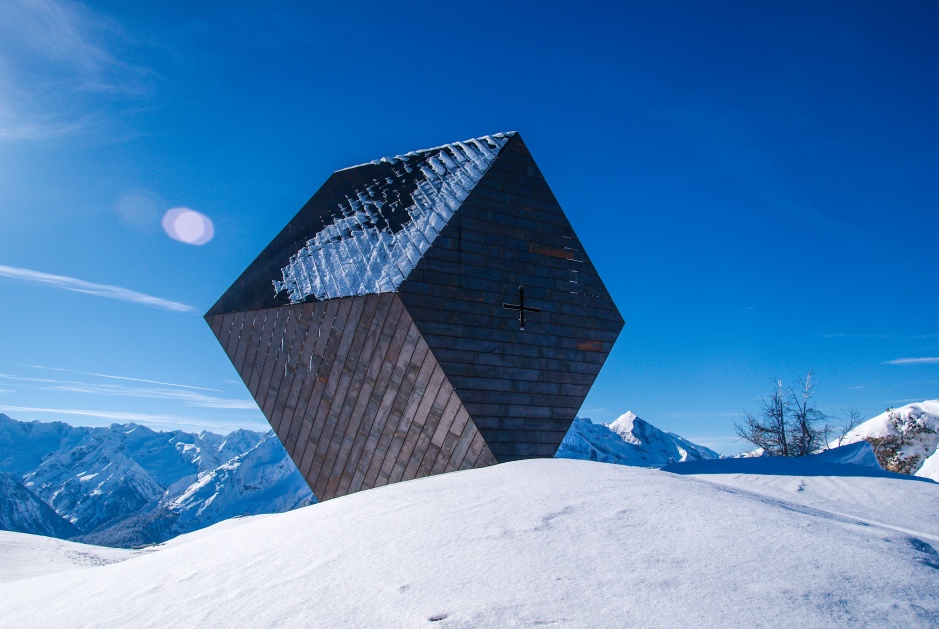 His commitment to interpreting the sensibility of contemporary culture and at the same time the will
to evoke and reinforce that territory of history and memory that constitutes the true heritage of the identity of European architecture, is configured as a “critical reason” that is opposed to fragility
of the models and fashions offered by the intense globalization.
For Mario Botta – always – “building is in itself a sacred act, it is an action that transforms one condition of nature in a condition of culture; the history of architecture is the history of these transformations. The need that drives man to confront the dimension of the infinite is one primordial necessity in the search for the beauty that has always accompanied man in the construction of one’s own living space. For the architect to penetrate expressive forms unknown in the attempting to respond to the needs of God’s house, it also becomes a way of rethinking the home man. “
The exhibition is accompanied by an illustrated catalog, accompanied by an introduction of essays
Critics (Salvatore Veca, Gianfranco Ravasi, Corrado Bologna, Pierluigi Panza, Giorgio Ciucci) and
a selected anthological collection to complement each chapter.
Antonio Gala