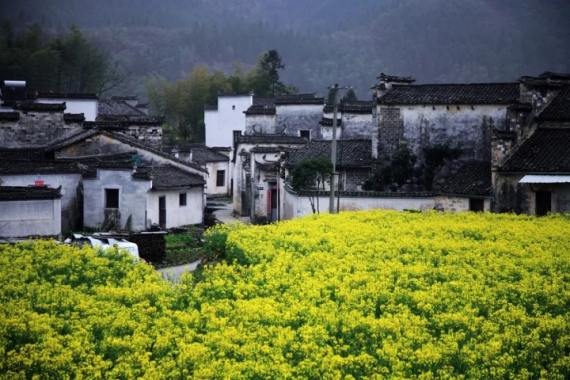 (Xinhua) — Walking past traditional Chinese buildings with cream-colored walls topped with dark tiles, a golden sea of rapeseed flowers and lush green bamboo forests, Huang Min, 29, guided an audience of 90,000 on her phone.

The picturesque scenery in Xidi Village, a UNESCO World Heritage Site in eastern China’s Anhui Province, is a top spring outing attraction for many Chinese people, and Huang, a local tour guide, is usually the busiest around the time of year.

This year, due to the coronavirus outbreak, the ancient village, like many other sites across the country, has been closed to visitors to avoid crowds and stop the contagious virus from spreading. However, institutions and tourism agencies are adopting virtual tours as a way to keep tourists engaged.

Eight of China’s well-known museums including the National Museum of China and Dunhuang Research Academy, which oversees the Mogao Caves, a UNESCO World Heritage Site, launched online tours on Feb. 23, which attracted over 10 million viewers.

On March 1, the Potala Palace, a landmark in China’s Tibet Autonomous Region, held a livestreaming tour the first time in its over 1,300-year history. The tour received about 920,000 views, more than half of the total visits the palace receives a year.

Since Feb. 21, Huang and her colleagues have been livestreaming tours of the village, which boasts 124 intact traditional Hui-style buildings as well as country sceneries, on multiple Chinese short video sites.

“It’s the time of year the village is the most colorful, and we hope more people can enjoy the scenery here,” she said.

Huang leads viewers on a typical visiting route as before, but the experience is new, as there are more interactions online and she has to pay attention to keep the phone at the right angle for her viewers.

In the past, it would take around 70 minutes to finish the walking tour. The new way takes around 20 munites more, and focuses on three to four selected sites.

“I’m glad that many viewers left comments that they’ll come to visit after the coronavirus outbreak ends,” Huang said.

“Online tours will be an important promotional method in the future,” said Hu. “Tourist sites can use them to build influence online and lure more visitors with interaction.”

Xu Yun, a resident in Hefei, the provincial capital of Anhui, is a fan of online tours. In two hours, she visited zoos and aquariums along with some 900,000 viewers on e-commerce platform Taobao’s livestreaming platform.

“It feels wonderful to ‘travel’ with so many people,” Xu said. “Viewing the animals in real time with the host and reading all those comments is fun during my long stay at home.”

Xu said livestreaming is more interactive, which makes it different from watching travel shows on the television.

“Some tours with unique perspectives can also give me ideas for planning offline visits to these places in the future,” she said.