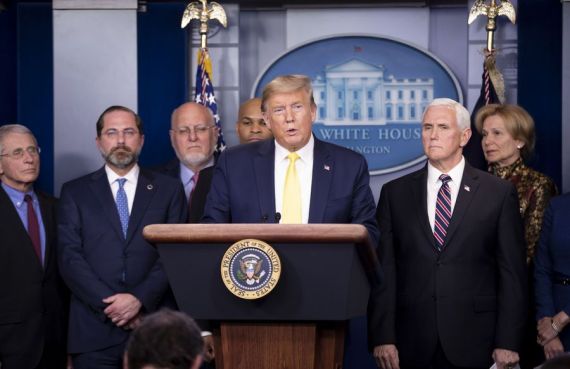 The country has tallied over 1,663 COVID-19 cases as of Thursday with at least 40 deaths, according to the Center for Systems Science and Engineering at Johns Hopkins University.

(Xinhua) — A growing number of cities, counties, and entities across the United States pushed out more stringent measures to contain the spread of COVID-19 on Thursday following President Donald Trump’s address to the nation late Wednesday.

The country has tallied over 1,663 COVID-19 cases as of Thursday with at least 40 deaths, according to the Center for Systems Science and Engineering at Johns Hopkins University.

The state of New York set up a “containment area” in a COVID-19 hotspot on Thursday, with National Guard troops dispatched on site to clean surfaces and deliver food to people in quarantine.

The containment area in New Rochelle, Westchester County, is within one-mile-radius around a point near a synagogue, in which schools, houses of worships and other large gathering places will be closed for two weeks.

Several shops and restaurants, while still open, are short of customers. Several members of the National Guard were seen unloading food from a truck Thursday morning, which was supposed to be school lunches for thousands of students in the area whose classes were cancelled.

New Rochelle, just outside New York City, is at the center of a COVID-19 outbreak in Westchester County with 148 confirmed cases, accounting for over 45 percent of the state’s total.

The community spread started from the state’s second confirmed case, an attorney who worked in Manhattan and was linked to dozens of diagnosed cases in the past week.

In New York City, Mayor Bill de Blasio declared a state of emergency on Thursday due to a foreseeable outbreak and predicted that more than 1,000 cases could surface next week.

The total number of confirmed cases in the city on Thursday doubled from a day before and reached 95, among which 22 are hospitalized and the rest are in home isolation, city officials said.

“This is going to be a long, painful episode,” said de Blasio in a press conference, adding that it may take six months for the city to deal with the immediate effects of the outbreak.

A notice of limiting sales of face masks is pictured at a pharmacy in New York City, the United States, March 7, 2020. (Xinhua/Li Muzi)

All Broadway shows have been cancelled in Manhattan as New York state Governor Andrew Cuomo announced on Thursday morning that the state would ban gatherings with 500 people or more, starting on Friday at 5 p.m. local time (2100 GMT).

Washington D.C. and neighboring states of Virginia and Maryland have all declared a state of emergency over the outbreak.

Several landmarks in Washington, D.C., including the White House, are closing to the public.

The Capitol canceled all tours Wednesday night and issued further restrictions to the public on Thursday.

Access to the Capitol, the House and Senate office buildings “will be limited to members, staff, credentialed press and official business visitors,” said Paul Irving, the House sergeant at arms, and Michael Stenger, the Senate sergeant of arms, in a statement.

These restrictions at the Capitol will remain valid until April 4.

Police stand guard near the Grand Princess cruise ship docking at the Port of Oakland, the United States, on March 9, 2020. (Photo by Li Jianguo/Xinhua)2020.

The Supreme Court closed from 4:30 p.m. (2030 GMT) on March 12 until further notice. It said in a statement the building will remain open for official business and case filing deadlines are not extended.

Southern California-based Princess Cruises announced Thursday that it will suspend global operations of its 18 cruise ships for two months due to the pandemic.

The cruise company, which operates two coronavirus-hit ships — the Grand Princess and the Diamond Princess, serves more than 50,000 guests daily from 70 countries.

Those currently onboard a cruise that ends in the next five days will continue to sail as planned, while current voyages that extend beyond March 17 will end at the most convenient location for guests, according to the statement.