Probably better known as the city of St. Anthony or as the economic capital of Veneto, Padua is one of the most important Art Cities in Italy. The classic itinerary includes the visit to the most important monuments of the town, especially those realized between the 13th century and the 15th century, the most extraordinary economic and cultural period, that left an indelible mark on the town: the Medioeval City Walls, the great civil and religious buildings, the University, the wonderful frescoe-cycles realized by Giotto and his followers, and later the works by Andrea Mantegna and Donatello. 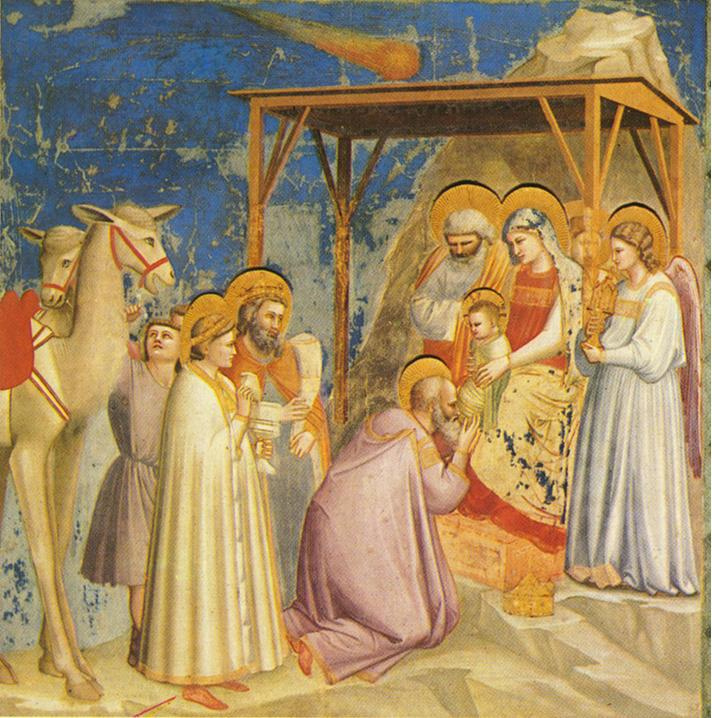 Adoration of the Magi, by Giotto

The itinerary can start from the ancient Roman Amphitheatre (the Arena) which surrounds the Scrovegni Chapel, which holds, entirely preserved, the most complete cycle of frescoes produced by Giotto (1303-1305), one of the greatest monuments of figurative art of all time. In the nearby Eremitani Town Museum, fitted out in the former Augustinian Hermits monastery you can admire precious archeological finds dating back to the paleovenetian, roman, etruscan and paleochristian periods, rare coins collections, and famous works of art produced between the 14th and the 19th century. Amongst them: the Crucifix by Giotto and the Armed Angels painted by Guariento. The adjacent Eremitani Church, built at the turn of 13th century, has a wonderful wooden ceiling, due to Fra’ Giovanni, and many monumental tombs.Badly damaged by bombing in 1944, it keeps in the Presbytery some frescoes by Guariento (1368 1370) and some juvenile masterpieces by Andrea Mantegna (1448-1457) in the Ovetari Chapel.

Not far away, separating Piazza delle Erbe from Piazza della Frutta, stands Palazzo della Ragione, commonly called Il Salone, a building of 1218, rebuilt in 1306 by Fra’ Giovanni degli Eremitani. A busy market occupies daily the ground floor and the adjoining Piazze. The upper floor is one vast hall (81 mt long, 27 mt wide and 27 mt large). On the walls is an interesting cycle of frescoes of religious and astrological subjects (1425-1440).

The city centre includes also the Cathedral. Michelangelo took part in the design of the present building which was erected between the 16th and the 18th century Inside there are many important paintings, beautiful statues by the tuscan artist Giuliano Vangi. The nearby Baptistery (12th century, retouched in 1260), named after St. John the Baptist, holds the finest and most complete cycle of frescoes by the florentine painter Giusto de’ Menabuoi (1376-1378), a masterpiece of the late 14th century, recently restored to its original splendour. The cycle begins with the wonderful Paradise and continues with the stories of St. John the Baptist, the Stories of Mary, the Passion, Death and Resurrection of Christ. In the pedestrian area you can find Bo Palace, the ancient university seat. This large group of buildings, erected between 1542 and 1601, with modern addictions from 1920-1940, is the main seat of the University founded in 1222.

Particularly interesting are the Old Courtyard (mid16th century), by Andrea Moroni; the Room of the Forty with Galilei’s chair, (he taught in Padua from 1592 to 1610), the Aula Magna, rich with coats of arms and decorations: the famous Anatomy Theatre by G. Fabrici d’Acquapendente, the oldest in the world (1594). Opposite the University is the Caffe Pedrocchi, a complex building in neo-classic style with a flourish ornate Gothic, designed by the architect G. Jappelli in 1831. Its upper floor has rooms decorated in various styles. Famous meeting place for scholars, it was the scene of student uprising in 1848. 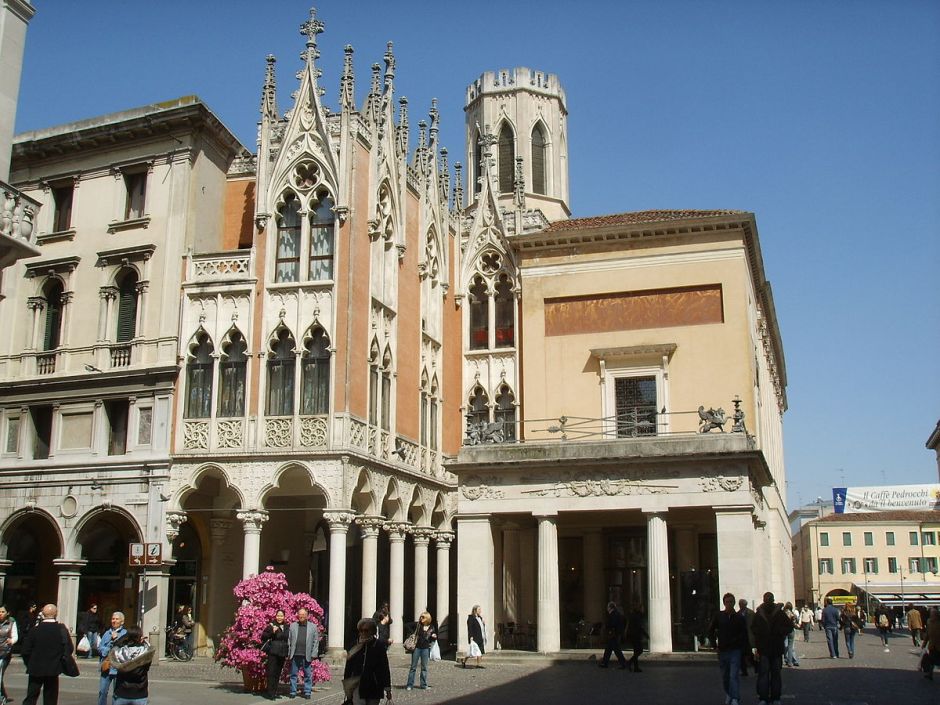 Walking towards via del Santo, in the Antenore square is the trojan hero Antenore, founder of Padova, and not far Palazzo Zabarella, ancient house of the Carraresi, nowadays a venue of events and exhibitions. Opposite to Zabarella Palace, before Via della Santo, the complex of the ancient Hospital of S. Francesco houses the Museum of the history of the medicine; thanks even to multimedia and interactive system it is worth a visit.

A short walk leads to St.Anthony Basilica. Started immediately after the death of the Santo (1231) and completed at the beginning of the following century, it is an imposing construction in Romanesque Gothic style, with eight domes and spires of eastern inspiration. It holds the body of St. Anthony and is the object of pilgrimages from all over the world. Among the numberless works of art it keeps, one must point out the frescoes by Altichiero and Giusto de’ Menabuoi (end of the 14th century). The Crucifix, the statues and the bronze reliefs of the High Altar, superlative works by Donatello (1444-1448); the Altar of the Saint and the Treasure Chapel.

Near the Basilica rise St.George Oratory, holding a great cycle of frescoes by Altichiero (1379-1384), the School of the Saint, that keeps three famous frescoes by Titian (1511), the Antoniani Museums, which keep a rare collection of sacred objects. In the square stands the bronze equestrian monument to the Gattamelata, Donatello’s masterpiece, completed in 1453.

Not far from the Basilica is the Botanical Garden, which was founded in 1545 with the name of “Simples Garden” (medicinal plants) by the Faculty of Medicine, was laid out by the architect A. Moroni. It displays an extremely important collection of rare plants.It houses the old library and botany collections of the University. The visits ends at Prato della Valle, once a Roman theatre, has become the traditional site for fairs and amusements. The square is surrounded by historical monuments and palaces such as the Basilica of St. Justina and the Palazzo Angeli which houses the Museum of the magic lantern (pre-cinema).

1 Comment on Padua, city of faith and religiuos heritage