Discover the blend of modern and traditional styles of living all at once.

Discover the beauty of nature and culture.

Kyrgyz Republic (Kyrgyzstan) is a rugged Central Asian country along the Silk Road, the ancient trade route between China and the Mediterranean, it borders Kazakhstan to the north, Uzbekistan to the west, Tajikistan to the southwest and China to the southeast.

Kyrgyzstan is a country of incredible natural beauty and proud nomadic traditions. The Tian Shan mountains, which surround the old caravan route and dominate the country, are home to snow leopards, lynx and yaks. The animals present in the region include the rare species, Tien-Shan bears and crimson wolves, which are protected by the law. Other animals found are mountain cattle, deers, etc. The lakes serve as yearly refuge to hundreds of transmigrating birds like mountain-goose and several other rare types.

The country is famous for its botanic diversity, as around four hundred species exist exclusively in Kyrgyzstan. Varieties of orchids, tulips and onions are remarkably copious. Alpine floras, such as Leontopodium alpinum, grow on mountain slopes. The uncommon flower – Aigul is found in the Alaai Mountains.  Very significant forests, having rare sorts of pistachio and walnuts, add great importance to this wonderful region. 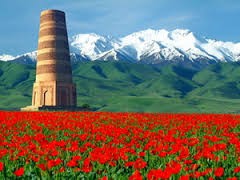 Being a small country according to its territory, the republic is one of the 200 priority ecological regions of the planet. In Kyrgyzstan, there is a network of protected areas that occupy 6% of the area of the country, among them: 1 Biosphere Reserve, 10 state reserves and 9 national parks, 68 wildlife sanctuaries. Kyrgyzstan has all types of tourist resources, in order to become in the future international tourist center. Citizens of more than 60 countries may enter Kyrgyzstan using simplified procedures (a visa can be issued by arrival at Manas International Airport). The dynamic development of touristic sector in Kyrgyzstan led to increasing popularity in regional and international ratings.

Embassy of the Kyrgyz Republic to the Kingdom of Belgium