The unpublished exhibition entitled Fellini’s Oniric Obsessions opened on Thursday 16 July in Sion (Switzerland) at the cultural center of the Fellini Foundation for [...] 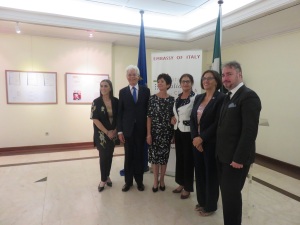 The Italian Language Week in the World promotes Italian as a great language of classical and contemporary culture. Every year the diplomatic and cultural network of the [...]

The exhibition Fellini: Circus of Light is an introduction to works of the film director Federico Fellini (1930 – 1993) that unveils critical aspects of the Italian [...]

30 October – 25 November 2014   The European Economic and Social Committee and the Fellini Foundation are presenting the world première of the exhibition [...]

A new exhibiton was inaugurated the 29th October at the Ludwig Museum in Koblenz on the occasion of the 20th anniversary of the disappearence of the “Maestro” [...]

The soul of Federico Fellini hovered in the European capital last September 20 where, for the first time,  a wonderful evening in honor of the great “Maestro” of [...]