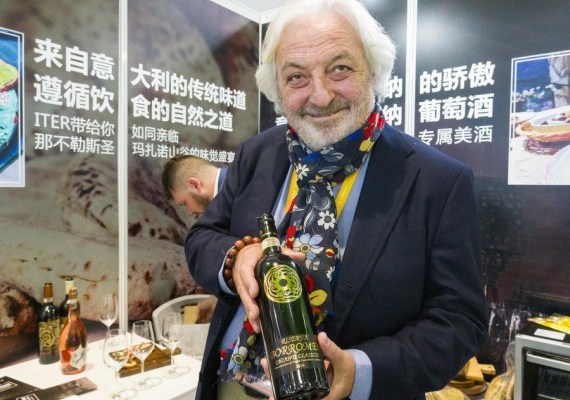 “The Chinese market has so much potential that it can’t be ignored,” said Simone Incontro, director of the Shanghai office for Verona Fiere (the parent organization for Vinitaly) told Xinhua.

(Xinhua) — Italian winemakers say they are making a major push to improve their foothold in China even as most of the world’s economy is struggling to emerge from the worst impacts of the coronavirus pandemic.

Italy has jockeyed with France for the title of the world’s top wine producer in terms of volume, but in the fast-growing Chinese market, Italy ranks a distant fourth, not only trailing France but also Australia and Chile, according to 2019 data from the IWSR, a global beverage market analysis group. Five years ago, Italy ranked seventh.

Italian wine sector officials told Xinhua they want to continue climbing the rankings. Vinitaly, Italy’s main wine fair, took its show to China this year, participating in fairs in three Chinese cities: Xiamen, Chengdu, and Shanghai. Shanghai hosted the last and largest of the three events, which will draw to a close on Saturday. Italy was represented at the fairs by 65 producers and distributors, a record number.

Back home, industry groups are holding strategy sessions to chart the best course for growth in the Chinese market.

Despite the difficulties of a hot and dry summer in most of Italy and a shortage of workers due to coronavirus travel restrictions, 2020 is shaping up to be a good year for Italian wines in terms of quality. Liv-ex, a wine sector monitoring group, reported in late August that the Italian wine trade this year had by that point already passed its value for all of 2019.

A major challenge, analysts and observers said, is to translate that demand to the Chinese market.

“The Chinese market has so much potential that it can’t be ignored,” Simone Incontro, director of the Shanghai office for Verona Fiere (the parent organization for Vinitaly) in Shanghai, told Xinhua. “Wine consumption in China has increased from 0.9 liters per person to 1.1 liters per person over the last two years.”

Incontro said he believed that China would become a far more important destination for Italy’s wine exports over the next five to ten years.

Francesco Zaganelli, export manager for Lungarotti, a major wine producer in the central Italian region of Umbria, agreed with Incontro that despite its economic difficulties that this period could be a key point for Italian winemakers.

Among Italian producers, Lungarotti has been a pioneer in the Chinese wine market, exporting directly to China for 15 years. Zaganelli said that a combination of factors, including greater recognition of Italian wines in China and the switch to a niche distributor that specializes in the Chinese market, have made a difference. He said that China is now the seventh-largest of Lungarotti’s 47 export markets.