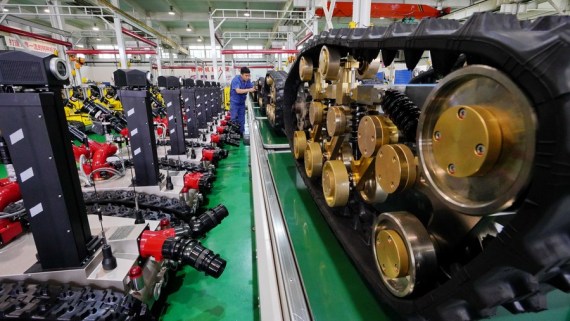 A worker debugs a special robot at a workshop in the Tangshan Hi-tech Industrial Development Zone in Tangshan, north China's Hebei Province, July 17, 2020.

In the first seven months of the year, the profits declined 8.1 percent to 3.1 trillion yuan, narrowing 4.7 percentage points from that in the first six months.

With the implementation of policies and measures to coordinate epidemic prevention and control with economic and social development, the industrial sector continues to improve and firms’ profits continue to see rapid recovery growth, Zhu said.

In July, profits grew in 32 of 41 industrial sectors surveyed, while 24 of them showed improvements compared with that in June, according to the NBS.

The auto industry’s profit rose by 125.5 percent year on year last month, expanding from a 16.9-percent increase in June as sales and investment income picked up.

Profits of electronics industry grew 38.6 percent from a year earlier thanks to the rising demand for upgraded products.

Besides, high-tech manufacturing continued to expand steadily, with profits rising 36.5 percent from a year earlier.

Zhu gave credit to the country’s relief policies implemented this year, including large-scale tax and fee cuts, as well as the decrease in electricity, land use and rental costs, which effectively reduced the burden on enterprises.

In a bid to propel the sustained improvement of industrial performance, Zhu called for expanding investment, giving full play to the advantages of the country’s huge domestic market, and stabilizing the supply chains and industrial chains.

The fiscal and financial support for enterprises should be combined with more streamlined administration and improved government services so that market vitality could be further unleashed, according to the State Council’s executive meeting held on Wednesday.

With people’s life and production returning to normal at a faster pace, profit growth of industrial enterprises is likely to pick up and maintain a trend of recovery, according to Yingda Securities.