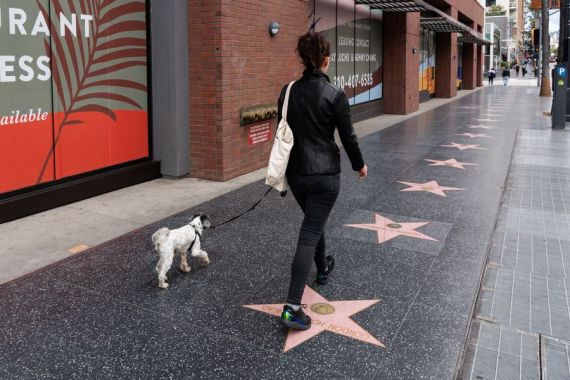 Photo taken on March 20, 2020 shows the Hollywood Walk of Fame in Los Angeles, California, the United States.(Photo by Qian Weizhong/Xinhua)

“We’ve seen many times in the past how people want and need entertainment during challenging times and this has been no different. When we adapt, we survive, and the faster and smarter we do it, the better we’ll be.”

(Xinhua) — After months of forced hiatus for film, television and music productions due to the coronavirus lockdown, much of Hollywood is rejoicing this week in response to California Governor Gavin Newsom‘s declaration that production in California could be greenlit as early as June 12.

This reopening represents a significant leap of hope for the entire industry that has seen hundreds of thousands of employees, cast and crew out of work and many production companies struggling to stay afloat.

“The resumption of production is exciting and I know the long-term future of the industry, worldwide, will be very strong,” Bob Underwood, a Hollywood motion picture screenwriter and a member of the Writers Guild of America’s (WGA) Foreign Employer Taskforce told Xinhua Monday.

Like everyone else in the industry, most of Underwood’s projects have been temporarily sidelined due to the lockdown, except an animation project.

“You can literally produce animation from concept to completion with every person working remotely,” he explained to Xinhua.

An Oscar statue is seen out of Dolby Theater during the preparations for the 92nd Academy Awards in Hollywood, Los Angeles, the United States, on Feb. 8, 2020. (Xinhua/Li Rui)

According to the California Department of Public Health, in order to reopen, individual productions will still be subject to specific pre-approval by local county public health officials and must follow stringent guidelines to keep cast and crew safe.

The motion picture industries guilds and unions compiled their own 22-page book of industry-wide guidelines on safe coronavirus-conquering working conditions last week and have submitted it to public health authorities for approval.

Their new guidelines include all the safety protocols now being used by the general population, such as wearing masks, frequent handwashing, and social distancing, and also require temperature checks of everyone upon arrival at work and extensive testing as well.

They also placed an increased emphasis on the frequent disinfecting of surfaces, props, equipment and supplies.

“Each make-up artist will need to designate completely new and separate make-up and brushes for each actor,” Vera Stromsted, an experienced hair and make-up artist in New York City told Xinhua.

Normally this is a practice used primarily for the top stars and studio pictures, and that is usually too expensive for the lower budget independent films which wash the brushes in between use instead of replacing them.

“A lot of very intelligent people have put a lot of time and effort into coming up with these guidelines,” international film producer, Andre Morgan of Ruddy Morgan, said to Xinhua.

“But it’s not the guidelines that are the fundamental issue, it’s how this country is handling or rather mishandling the COVID-19 crisis in America,” he said, asserting that greenlighting production in June was premature.

Though he said the most accurate information on the virus has come from Newsom and New York Governor Andrew Cuomo, he contended that in general.

“This country has been leaderless and not done a good job of setting up any sort of testing and tracking systems like the other countries dealing with COVID. We haven’t even peaked on the cases on LA, so how can we talk intelligently about putting people back to work when we may be putting them in harm’s way?” he queried.

He also expressed concern that medically speaking, “No one knows yet how significant the second wave of the virus will be,” and that financially, “What will happen if you have to shut down the film halfway through the shoot? That would be worse than if you hadn’t started at all.”

Morgan suggested local government should take a leaf from China’s former leader, Deng Xiaoping, who advised that the best way to cross a river safely — or achieve one’s goal, metaphorically speaking — “was to feel for a safe stone on the riverbed before one takes their next step.”

“One step at a time is safer,” Morgan contended. “This is more like a leap than a safe step.”

But for others, a pandemic of this proportion is just another one of the many perils that filmmakers face on a daily basis in order to achieve that unforgettable, show-stopping shot.

“Producing movies and television during a pandemic brings many challenges but Hollywood has 100 years of experience making productions under all sorts of unusual and dangerous conditions,” the WGA’s Underwood told Xinhua.

He is certain the industry is resourceful and sensible enough to be able to produce quality projects while keeping their casts and crews safe from COVID-19.

He added thoughtfully, “We’ve seen many times in the past how people want and need entertainment during challenging times and this has been no different. When we adapt, we survive, and the faster and smarter we do it, the better we’ll be.”