The allegories of Justice and Friendship, painted in oil between the frescoes of the Salone di Costantino in the Vatican,
represent the last work of Raphael before his death, which occurred 500 years ago. The exceptional discovery came to light
at the end of a restoration conducted by the Vatican Museums. In recent days the paintings have been discovered and soon
the public will also be able to see them in compliance with the security measures

The recognition of the style, of the technique, of the aptitude for experimentation proper to the genius of Raffaello Sanzio,
corroborated by the comparison of the historical sources and the results of the scientific analyzes, led to attributing
to the Divine Painter the allegories of Iustitia and Comitas, the only ones two female figures painted in oil among the frescoes
of the Constantine Hall in the Vatican.

The emotion of a discovery

Amazement and wonder accompanied the unveiling of the newly restored paintings, which took place on Wednesday 13 May
in the presence of the director Barbara Jatta and about 20, among experts and researchers of the Vatican Museums.
The conservation and cleaning works carried out since 2015 on three walls of the large room allow in fact to grasp
new details of the entire pictorial cycle, but above all to fully enjoy the sensational discovery that would have been
at the center of an international conference scheduled in the Vatican for the last April 20 as part of the 500th anniversary
of the disappearance of the great painter. The emergency linked to the coronavirus prevented the symposium from taking place,
but the now reopening of the Vatican Museums will allow us to admire what are probably the last artistic testimonies
left by Urbinate.

In fact, between autumn 1518 and spring 1519, at the height of his twelve-year stay in Rome, Raphael received from Leo X Medici
the task of decorating the Aula Pontificum Superior, or the room, intended for banquets, receptions of ambassadors and political
authorities: the fourth and largest of the rooms of the representative apartment on the second floor of the Apostolic Palace.
Impressive dimensions: 18 meters in length by 12 in width, on a height of about 13. The untimely death that occurred at the age of 37,
after long days of illness, on April 6, 1520, did not allow the Maestro to translate into painting the detailed iconographic program
that he had developed, as documented by the numerous drawings that have come down to the present day. The decoration was in fact completed as a fresco by Giulio Romano, Giovan Francesco Penni and other workshop collaborators. 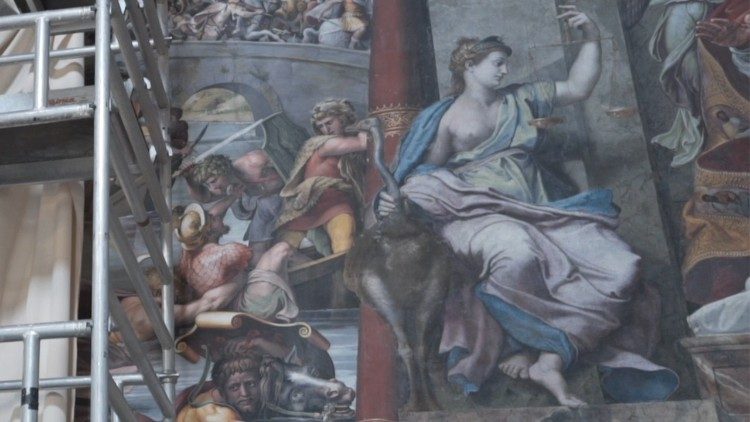 The oil on the wall

The idea was to decorate each of the four walls, simulating fake tapestries, salient episodes from the life of Constantine, such as the Vision of the Cross, or Adlocutio and the Battle of Ponte Milvio: we wanted to give an artistic form to the idea of ​​the transmission of the auctoritas from classical Rome to Christian Rome. Returning from the successes of the Stanze della Segnatura, Eliodoro and the Incendio di Borgo, Raphael decided to experiment with oil on the wall, a technique proper to painting on wood.

It is Giorgio Vasari, the famous biographer of the Painters’ Lives, who first mentioned two female figures painted in oil in the last period of Raphael’s life. This debated aspect has always been a passion for the comparison between art historians, divided on the authorship of Iustitia and Comitas. The two allegories, the first to the right of the “Battle”, the second to the right of the Adlocutio, flank the figures of the popes, eight in all, represented enthroned in niches on the sides of the major scenes, and have always stood out on the whole cycle in terms of beauty and qualitative superiority.

The restoration and attribution to Raphael

The alteration of the color caused largely by glues and restoration interventions that have alternated over the centuries, so far has not allowed to confirm the hypothetical attribution to Raphael, also remembered by Stendhal in the Roman Walks. The long and complex restoration just concluded by the Vatican Museums, thanks to the support of the Patrons of the Arts in the Vatican Museums, has brought to light significant elements that allow the two Allegories to be traced back to Urbino. Refined cleaning methods of the pictorial surface have been carried out since 2015 on three walls of the Sala di Costantino by the technicians of the Restoration Laboratory led by Francesca Persegati, coordinated by Fabio Piacentini, under the scientific direction of Guido Cornini. The interventions allowed the extraordinary colors of the entire pictorial cycle to emerge clearly, which inaugurated the season of Raphael’s mannerism.

The nails under the wall

Especially in the Iustitia and Comitas, made respectively in fat and oil tempera, the iridescent, transparent and nuances of the ductus and the Sanzio palette stand out. The discovery of numerous nails below the surface on which the two Allegories stand out is also significant. These metal elements had the function of anchoring the rosin to the wall, that is the Greek pitch laid out hot and covered by Raffaello with a thin layer of white plaster with the intention of reproducing the same characteristics on the wall as a table and so proceed with confidence to the execution of oil painting.

The project of conducting all the decoration of the Sala di Costantino with the same technique was soon abandoned by the students who, having died the Maestro, were unable to successfully match the daring experiments. They therefore decided to dismantle the wall and set up a new plaster, safeguarding only Iustitia and Comitas, whose chromatic refinement equals excellent masterpieces such as Fornarina. The rest of the feat was completed using the safest fresco technique.

The two Virtues therefore represent a unicum, which visitors will soon be able to appreciate live together with all the unparalleled heritage of the Vatican Museums. The “Pope’s collections” are in fact ready to reopen ensuring maximum security. The restoration of the Sala di Costantino started in March 2015 also involved the vault and will continue from this summer on the fourth and last wall where the Raphael School frescoed “The Donation of Rome”.