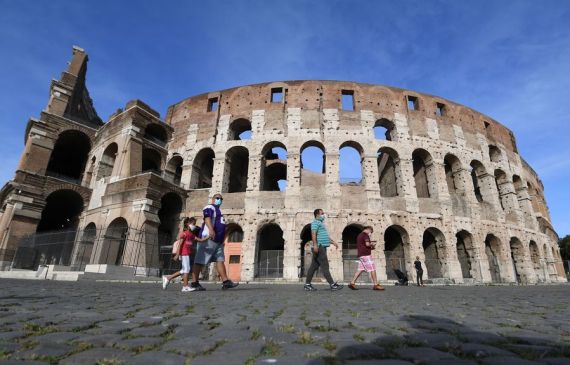 People are seen at the Colosseum in Rome, Italy, on May 8, 2020. (Photo by Alberto Lingria/Xinhua)

The total number of COVID-19 infections, fatalities, and recoveries since the pandemic began in Italy has risen to 218,268 cases as of Saturday.

(Xinhua) — The number of recoveries from COVID-19 in Italy has exceeded 100,000, according to the latest tally posted by the country’s Civil Protection Department on Saturday.

Of those tested positive for the coronavirus, 13,834 are hospitalized with symptoms (down by 802 patients over the past 24 hours), while 1,034 are in intensive care (down by 134 patients compared to Friday).

The rest 69,974 people, or 82 percent of the positive, are quarantined at home because they are asymptomatic or with mild symptoms.

A total of 30,262 cases, the vast majority of current active cases, occurred in the Lombardy region whose capital is Milan, followed by 13,934 infections in its neighboring Piedmont region with Turin as capital.

In the rest of Italy’s 20 regions, the number of infections ranged from a high of 7,401 in the northern Emilia-Romagna region to a low of 111 cases in the central Umbria region, according to the Civil Protection Department.

The single-day death toll on Saturday was 194, bringing the total to 30,395 since the outbreak was first recorded in Italy’s northern Lombardy region on Feb. 21.

The total number of COVID-19 infections, fatalities, and recoveries since the pandemic began in Italy has risen to 218,268 cases as of Saturday.

Also on Saturday, the Italian Society of Cardiology (SIC) said that according to a new study published in the European Heart Journal, deaths from heart failure tripled in Italy in the week of March 12-19, 2020, compared to the same period last year.

This was due to the fact that people with heart conditions avoided hospitals in fear of contracting the coronavirus, according to the study.

“The increase was due in the majority of cases to heart attacks that went untreated or were treated too late,” said Carmen Spaccarotella, co-author of the study conducted in 54 Italian hospitals.

“Our study found that mortality was three times higher compared to the same period in 2019, rising to 13.7 percent from 4.1 percent,” she explained.

“We are very concerned about this data,” said SIC President Ciro Indolfi.

“The great results achieved in terms of survival over the past 20 years… appear to be nullified,” he said, adding that cardiovascular diseases kill about 260,000 people in Italy on a yearly basis.

A worker harvests carrots in Maccarese near Rome, Italy, May 5, 2020. Italians enjoyed more liberties on Monday, as some restrictions on productive activities and personal movements were relaxed for the first time after almost eight weeks. (Photo by Alberto Lingria/Xinhua)

In a statement on the occasion of Europe Day, Italian President Sergio Mattarella called on the European Union (EU) to come together in the face of the pandemic.

Italy has been pushing for the EU to come up with a multi-billion-euro “recovery fund” to help EU member states whose economies have been crippled by the negative fallout from the pandemic.

“What is at stake is not only the response to the epidemiological crisis, but a key testing ground for the future of our peoples and the stability of our continent itself,” the president said.

Mattarella added that “the European path has produced enormous progress over the past 70 years” and that “weaving the threads of our common destiny is a duty we cannot avoid”.

Europe Day marks the anniversary of the historic Schuman Declaration,  made by then French Foreign Minister Robert Schuman in Paris on May 9, 1950, which set out his idea for a new form of political cooperation in Europe.

Laborers work at the construction site of metro line C in Piazza Venezia of Rome, Italy, May 8, 2020. (Photo by Alberto Lingria/Xinhua)