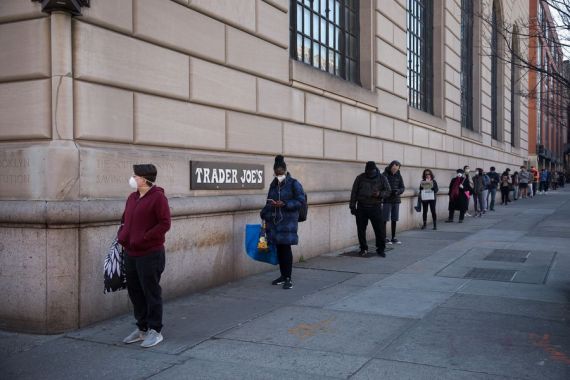 People wait in line to shop at a supermarket in the Brooklyn borough of New York, the United States, March 26, 2020. (Photo by Michael Nagle/Xinhua)

The economic downturn stemming from the COVID-19 pandemic has been “rapid and sharp,” and it’s impossible to know at this point how deep the recession will be, former U.S. Fed chair Janet Yellen said.

(Xinhua) — The U.S. Congressional Budget Office (CBO) estimates that second-quarter GDP will decline by more than 7 percent in the second quarter due to continued disruption of commerce amid COVID-19 pandemic, according to a statement released Thursday.

If that happened, the decline in the annualized growth rate reported by the Bureau of Economic Analysis would be about four times larger and would exceed 28 percent, the CBO said.

Former U.S. Federal Reserve Chairwoman Janet Yellen said earlier this week that every indication so far suggest there will be “a huge plunge” in output in the second quarter, noting that the decline could “easily be 20 percent or higher.”

The economic downturn stemming from the COVID-19 pandemic has been “rapid and sharp,” and it’s impossible to know at this point how deep the recession will be, Yellen said.

The newly released number of weekly claims was about 10 times larger than it had been in any single week during the recession from 2007 to 2009, the CBO noted.

A person wearing a face mask rides a bicycle at Times Square in New York, the United States, on March 26, 2020. (Photo by Michael Nagle/Xinhua)

Michael Hicks, director of the Center for Business and Economic Research at Ball State University in Indiana, told Xinhua via email that he’d predicted a roughly 15-percent unemployment rate by the end of May.

“We are losing jobs faster” than previous analysis projected, “but much of that is attributed to much more aggressive shelter-in-place orders than we anticipated in early March,” Hicks said.

As the novel coronavirus continues to sweep across the country, some 40 states have ordered residents to stay at home unless necessary, including the heavily hit New York, New Jersey, Michigan, California, and Louisiana.

Non-essential businesses, such as theaters, museums, gyms, and shopping malls are largely shutdown, and restaurants and bars are asked to close to in-person dining, effectively paralyzing the consumption-driven U.S. economy.

The CBO statement also noted that interest rates on 10-year Treasury notes are expected to be below 1 percent during the second quarter as a result of the Federal Reserve’s actions and market conditions.

CBO’s economic projections, especially for later periods, are highly uncertain at this time, it added.