The Jeronimos Monastery is, along with the Belem tower, the most important tourist attraction in Lisbon, inside which lies the tomb of Vasco de Gama.

The Jerónimos Monastery, also called Hieronymites Monastery, is along with the Tower of Belém, one of the most visited sites in Lisbon. UNESCO declared it a World Heritage Site in 1983. This landmark is called Mosteiro dos Jerónimos in Portuguese.

The religious building was designed by the Portuguese architect Diogo de Boitaca to commemorate the return of Vasco da Gama from India. The construction began on 6 January 1501 and wasn’t completed until the seventeenth century.  The building is predominantly Manueline style (Portuguese late Gothic).

Curiously, the monastery was built on the site of the former Ermida do Restelo, the chapel where Vasco da Gama and the rest of the sailors prayed before setting sail down the African coast to India. 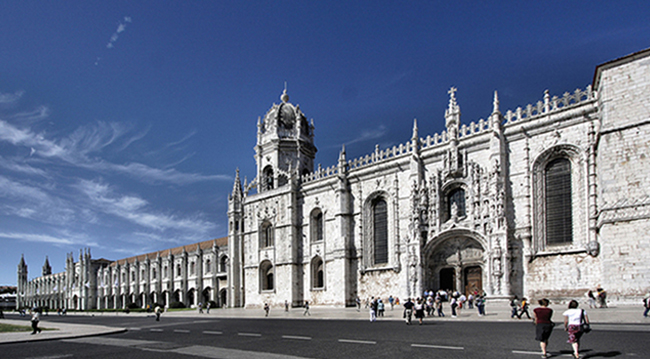 The Church of Santa Maria is unique in the world. It is completely different from the rest. The temple has a single nave that is held up by six beautifully sculpted columns and the church seems to go on forever.

The Church houses the tombs of Vasco da Gama and Luís de Camões, a Portuguese poet and writer.

The Jerónimos Monastery’s two-story cloister is even more beautiful than Lisbon Cathedral’s nunnery. It is much larger and its decorative ornamentation and symbolism are breath-taking.

When you explore the cloister, you’ll see the church of Santa Maria from above and the tomb of Fernando Pessoa, a renowned Portuguese writer and poet. One of the cloister’s halls is dedicated to the history of the Monastery, which is compared to the country and the rest of the world’s evolution.