A masterpiece of Romanesque art, Pomposa Abbey  in the province of Ferrara, Italy, can be seen from a distance with its towering campanile, which dominates the surrounding countryside like a “lighthouse” in the sea of green that surrounds it.
The church was founded in the 6th century A.D. and from the middle of the 9th century the first community of Benedictine monks began to form, reaching its peak after the year 1000, when the Abbot’s spiritual and political jurisdiction extended over all the surrounding villages. A true lighthouse of culture, Pomposa had one of the most extensive libraries of the time. Among the personalities that made it so famous were the saint and abbot Guido degli Strambiati and Guido da Pomposa (known by the name of Guido d’Arezzo), inventor of the modern musical notation. In front there is the Palazzo della Ragione, from which the abbot administered justice in his feuds. As the building did not have religious functions, it was detached from the others.

From the cloister we can enter the Chapterhouse, frescoed in the 14th century with a Crucifixion, the portraits of Saint Benedict and Saint Guy, the abbot of Pomposa and to the sides monochromatic portraits of prophets.

In the nearby Refectory there are three well-conserved frescoes, which, from the left, show The Last Supper, Christ Enthroned with the Virgin Mary, Saint John the Baptist and the Saints Benedict and Guy and to the right The Miracle of Saint Guy, which shows the blessed abbot who transforms water into wine in the presence of the Archbishop of Ravenna, Gebeardo.

Bell Tower of the Abbey of Pomposa

To the side of the church stands the 48-metre higt campanile, built in 1063 by the architect Deusdedit who chose to be remembered on the western wall. It is divided into nine levels, each one having windows that are wider and with more lights than the level below it, giving the building a particularly light and soaring appearance that is emphasized by the spire of considerable heigt. The red and yellow brick face conserves very rare inserts of ceramic bowls coming from various parts of the Mediterranean such as Egypt, Tunisia and Sicily. 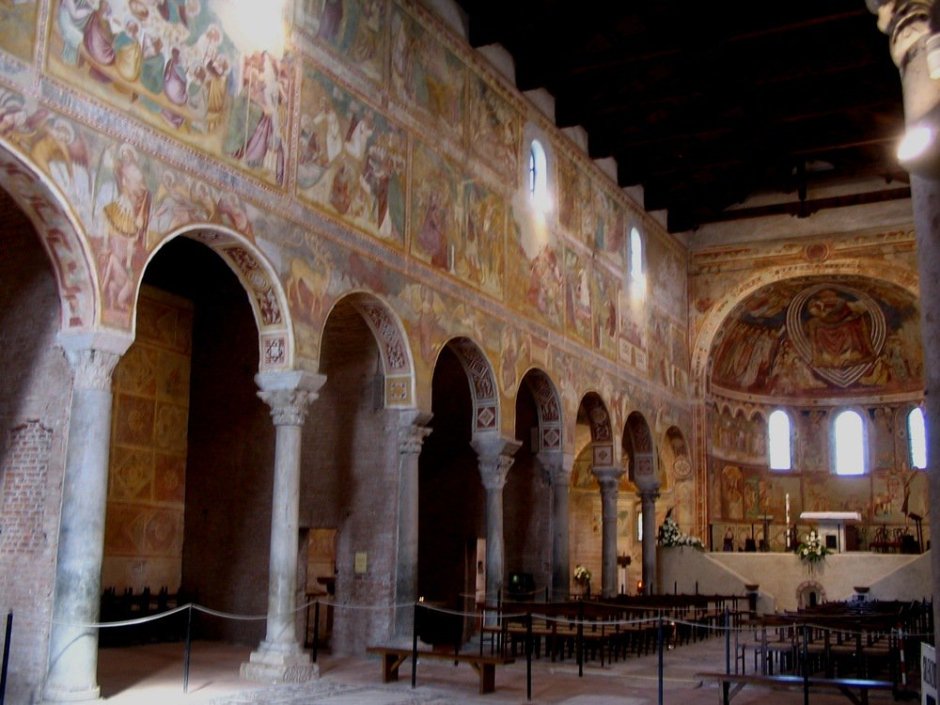 The abbey church, with a portico (narthex) in front of it, richly decorated in terracotta, marble and colourful majolica tiles, was built in between the 8th and 9th centuries and has the appearance of a late Ravenna-style basilica. Some parts are decorated with geometric designs, others with concentric circles and yet others with animal figures and vegetative motifs. In the apsidal vault is the fresco Christ in Glory surrounded by angels, saints and the Virgin Mary, executed by Vitale da Bologna in 1351. Below the fresco appear the Evangelists, the Doctors of the Church and the cycle dedicated to the stories of Saint Eustace. Along the side walls of the central nave runs a rich 14th-century frescoed decoration, arranged in three bands. The upper band shows scenes from the Old Testament, the middle one shows scenes from the New Testament and the lower one, at the level of the arches, scenes from Saint John’s Apocalypse. On The wall on the inside of the façade is a representation of the Last Judgement.