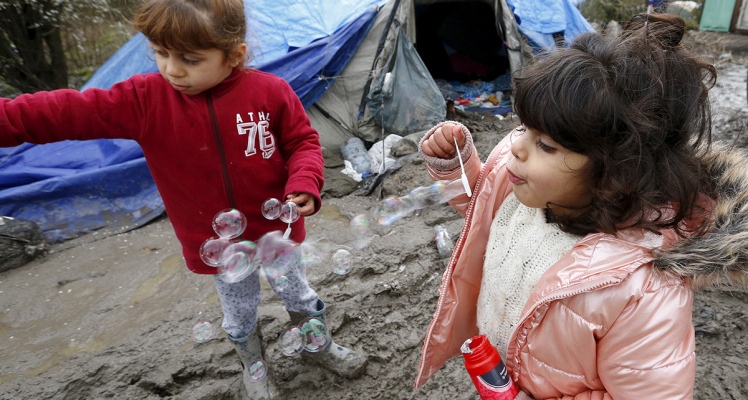 Young migrants make soap bubbles in a muddy field at a camp of makeshift shelters for migrants and asylum-seekers from Iraq, Kurdistan, Iran and Syria, called the Grande Synthe jungle, near Calais, France, February 3, 2016. European Union countries on Wednesday approved a 3 billion euro ($3.32 billion) fund for Turkey to improve living conditions for refugees there in exchange for Ankara ensuring fewer of them migrate on to Europe.REUTERS/Yves Herman - RTX25BJL

The ‘deep concern’ about the growing numbers of child refugees and about the situation of unaccompanied, missing or separated children is expressed in European Parliament Annual Report on human rights and democracy  in the world (2015), presented by Josef WEIDENHOLZER (S&D,AT).
Urging the Member States to make it an absolute priority swiftly to reunite unaccompanied minors with family members, the report also  stresses the need of providing children with access to health care and education as part of EU programmes to address the root causes of migration.
MEP Weidenholzer calls on states to end the detention of children, as well as to take into account the best interest of the child in all procedures and ensure protection for children according to international law.
A special focus is on protection of refugee and migrant children from violence, exploitation and abuse.

Reported by Europol there is a tremendous amount of crossover between smugglers smuggling refugees across borders and gangs ensnaring people for forced sexual and labour exploitation.

According to the Europal sources the prime vicitms of the exploitation by criminal gangs are unaccompanied childern and young women. Unfortunately the unaccompanied migrant children disappearance is mainly underreported. For many of these children, the journey into exploitation and suffering does not end once they arrive on EU shores.

Europol underlines that there is a “tremendous amount of crossover” between smugglers smuggling refugees across borders and gangs ensnaring people for forced sexual and labour exploitation.

Actual figures on anaccompanied migrant/refugee child situation in Europe is depressing: according to various sources half of them by arriving to Europe went missing, according to different estimates there are between nine and 13 thousands missing migrant children in the EU.