2 FREE TICKETS TO WIN FOR THE “FIESTA LATINA”, on Augustus, 19th., at 2.30 p.m., ONE ORGANIZATION OF THE « WORLD FOLK FESTIVAL OF JAMBES-NAMUR ». PLEASE, READ OUR QUESTIONS BELLOW THIS ARTICLE!

The 2 first people giving the 2 good answers will win, each one, one free ticket for the show of Augustus 19th., at 2.30 p.m. So, write us fast to this adress:  croatyves@gmail.com.

Dances, musics and songs of Equador and Mexico will be at the program of the “Fiesta Latina”, organized by the “World Folk Festival of Jambes-Namur”, in the “Espace Francis Laloux”, in the “Astrid Park” (“Parc Astrid”), located in Jambes.

Three full shows, with different local, regional or national danses of both companies, in different costumes, will be offer to the audience, during this month of August, on Friday, 19th. and on Sunday 21st., at 2.30 p.m., without to forget the only one in the evening, on Saturday, 20th., at 8 p.m.

Also, on Friday, 19th., at 8 p.m., everyone will have the opportunity to dance with professional dancers, on these great latin american rythms, the music being plaid live by the musicians of both groups and, also, by a Belgian group called “Luna Nueva”, being specialized with this kind of so nice music.

On Saturday, 20th., 2 workshops will be organized, at 10 a.m., with professional Equatorian choreographer, dancers and musicians, and at 2 p.m., it will be the same, but with different rythms of our Mexican friends. This is a great opportunity to learn some dances of this part of our world, being teached by authentic choreographers, coming directly from both countries.

Coming from Cuenca, in Equador, the « Conjunto de Danza Folklórica Expresión Latino Americana », created in 1981, will show us, with 25 people on stage, some dances about the Inca’s traditions and from the Ands, in relation with the life of the Canaris, their religious events, the agriculture, …

The main musicians’ rythms are the cachullapi, the danzante and the yumbo, without to forget the anjuanito, coming out of Otavalo, at the North of the Ands and having the quechua as native langage. Main instruments are the bombo (precolombian drum), the charango (little 5 strings’ guitar with acute sounds) and the rondador (bambo flute).

On the Pacific Coast, in the Esmeraldas’ Province, main dances are the bambuco and the currulao, being danced on real black african sounds, the music being played with the marimba (big wood xylophone) and some percussions. Also, from Spanish influence, the pasacalle and the pasillo will be danced on stage.

So, on the southern bank of the Meuse River, we will do a great musical and dancing trip from the equatorial climat of the Pacific Ocean’s beaches till the Chimborazo’s eternal snow.

Coming from Mexico City, the 36 members of the «Compañía Nacional de Danza Folklórica», created in 1975, wich already came in Jambes, 27 years ago, will offer us dances and musics from the different regions of the country (Chiapas, Jalisco, Michoacán, Nayarit, Oaxaca, Veracruz, …), without to forget some Aztec’s evocations and the presence of authentic “Mariachis”, real national emblems of the Mexican musical culture.

Former great dancer in some of the most important Mexican folk companies, having created a national system of professional dance education, winner of the “Coatlicue Award”, Nieves Paniagua is the choreographer of the «Compañía Nacional de Danza Folklórica». Thanks to her, the folk dance is now really recogned as part of the Mexican Culture. 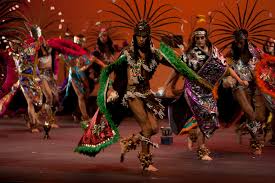 You can buy your ticket(s), in the “Tourist Office” of Namur, near to the railway’s station, and in all the “Night and Day” ‘s shops all over Belgium or by their internet adress: http://www.librairie.be. Also, one hour before each show, you can buy your ticket(s) at the gate of the “Espace Francis Laloux”, in the “Astrid Park” (“Parc Astrid”), in Jambes’  Centrum.

Definitively in August, each year, Jambes-Namur becomes, for some days, the folk dances’ capital of the world (more informations, in french, on: http://www.festifolkjambes.be).

Here are the 2 questions:

The 2 winners will receive an e-mail telling them the good new! Don’t forget to send your both answers to: croatyves@gmail.com, with your family name, first name, adress and phone number. Your free ticket will wait for you at the welcome desk of the “Fiesta Latina”, in the “Espace Laloux”, being located in the “Astrid Park” (“Parc Astrid”), in the center of Jambes-Namur.