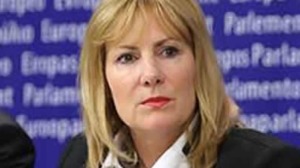 ”I despair at Russia’s treatment with sanctions and sabre rattling over Ukraine, yet we are appeasing China?” – said vice-president of the #ENF/ENL European parliament group, MEP Janice Atkinson (UK) ahead of the hearing on China’s ‘market economy status’ (MES) at plenary session in Strasbourg on 10th of May.
Three millions of jobs across the EU will be threaded if China start operating under MES, making imposing dumping duties hard to apply.
On contrary to the USA, considering centralised and subsidised by the state, guided by Communist party with fixed price policy economy of the Asian giant, – the EU has no consensus on the move, raising a lot of concerns. The economic impacts China’s operations under MES status are more of a problem than an advantage to 28 member states, struggling to reduce unemployment rate, staying record high at the level 10%, or more than 20 millions European looking for jobs. The whole brunches of industries as steel, textile and solar panel production will receive a serious blow. Beyond direct effects on unemployment, Chinese dumped goods are not concerned with the environmental foot print, creating times more damages to nature and undermining CO2 emissions goal.
”China – our group Europe of Nations and Freedom #ENF managed to get #ChinaMES deal discussed in plenary, along with the Socialists&Democrats, causes lots of opposition”, – continues Atkinson. -”We must play hard ball with China to stop illegal dumping of goods, namely Steel. However, too many countries are in debt to them and wooing a Communist country with appalling human rights, that is unacceptable”
hb