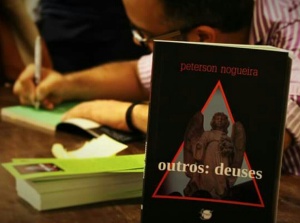 In a historical period in which the presence of religious beliefs so strongly influences the Brazilian public debate, there have been fictional works that seek to take off the discussions of “autopilot” and offer renewed perceptions on the topic. In Natal literature, an example of this is the storybook ” Outros: Deuses“, work of Portuguese and literature teacher Peterson Nogueira, launched in November in the state capital Natal by the CJA publisher, which was presented also in Areia Branca n Friday the 11th of December at a book signing.

Despite what the title might suggest at first glance, it is not a religious book, as the author wishes to emphasize. “The idea is to bring a vision, in a sense, anthropological and social dimension of this life of the individual and of society,” he explains. Religiosity is present more as a cross-cutting issue in the narratives, which also turn to issues such as angst, gender issues and infidelity.

The book has 14 stories and have their human landscape and its scenarios mainly located in Rio Grande do Norte, with stories that take place in the inner cities and Natal. Nevertheless, this approach also takes place from the outside in the state, that is, from “potiguares” (rio grande do norte) characters that are in cities such as Dublin or Buenos Aires and reflect on their lives from this double perspective: the origin and the place chosen to live.

” Outros: Deuses ” brings together texts that began to be written by Peterson Nogueira for about 10 years. The impulse that made him want to publish the book also comes far more specifically 2006, when he won the Literary Contest Silvia de Vasconcelos Hall, at the Mossoró City Hall, with the ” Brincando de bonecas ” story. “It was from the attention and the interest generated by this award, I felt encouraged to do the book,” he recalls.

Literature is part including the professional life of the author. Degree in Letters from the University of Rio Grande do 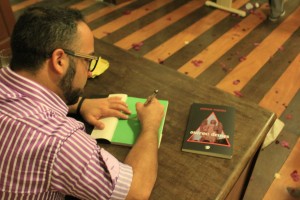 Norte State (UERN), Peterson Nogueira was born in Areia Branca and professor of Portuguese and literature for over 10 years, currently teaching in Ceará IFRN Mirim and School Applied Sciences in Natal .

He did his master’s degree in the area and is currently pursuing his doctorate at the Graduate Program in Language Studies (PPGEL), the Federal University of Rio Grande do Norte.

The book contains contributions from both environments, both academic and school. In the first case, due to the presentation of the book, written by graduate teacher PPGEL Ilza Matias de Sousa. In the second, according to the illustrations that accompany some stories, made by a Peterson Nogueira student of just 16, Julia Mendes.

The studies also led him to one of his major influences, the writer Caio Fernando Abreu, the subject of his dissertation. Your preferences, however, go well beyond: from the German Goethe and the classical canon of Brazilian Machado de Assis and Guimarães Rosa, to contemporaries as Joca Reiners Terron, Daniel Galera and Marcal Aquino.