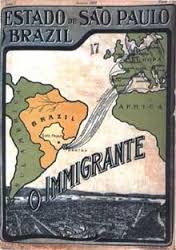 From our special correspondant in Brasil: Henry BORZI

Throughout its history, Brazil has always been a recipient of immigrants, but this began to gain importance in the late 19th century and throughout the 20th century when the country received massive immigration from Europe, the Middle East and the Far East, which left lasting marks on demography, culture, language and the economy of Brazil.

In general, it is considered that people who entered Brazil until 1822, the year of independence, were colonizers. Since then, those who entered the independent nation were immigrants.

Before 1870, the number of immigrants rarely exceeded the two or three thousand people a year. Immigration increased pressure from the first end of the international slave trade to Brazil, after the expansion of the economy, especially in the period of large coffee plantations in the state of São Paulo.

Immigration has been a very important demographic factor in the composition, structure and history of human population in Brazil, with all its attending factors and consequences in culture, economy, education, racial issues, etc. Brazil has received one of the largest numbers of immigrants in the Western Hemisphere, along with the United States, Argentina and Canada.

Arrival of Germans in Southern Brazil.

Immigration properly started with the opening of the Brazilian ports, in 1808. The government began to stimulate the arrival of Europeans to occupy plots of land and become small farmers. In 1812, settlers from the Azores were brought to Espírito Santo and in 1819, Swiss to Nova Friburgo, Rio de Janeiro. After independence from Portugal, the Brazilian Empire focused on the occupation of the provinces of Southern Brazil. It was mainly because Southern Brazil had a small population, vulnerable to attacks by Argentina and the Kaingang Indians.

From 1824, immigrants from Central Europe started to populate what is nowadays the region of São Leopoldo, in the province of Rio Grande do Sul. According to Leo Waibel, these German immigrants were mainly “oppressed peasants and former soldiers of the army of Napoleon.” In 1830 a bill was passed forbidding the Imperial government from spending money with the settlement of immigrants, which stalled immigration until 1834, when the provincial governments were charged with promoting immigration.

In 1859, Prussia prohibited emigration to Brazil. This was mainly because of complaints that Germans were being exploited in the coffee plantations of São Paulo. Still, between 1820 and 1876, 350,117 immigrants entered Brazil. Of these, 45.73% were Portuguese, 35.74% of “other nationalities,” 12.97% Germans, while Italians and Spanish together did not reach 6%. The total number of immigrants per year averaged 6,000. Many immigrants, particularly the Germans, were brought to settle in rural communities as small landowners. They received land, seed, livestock and other items to develop.

In the last quarter of the 19th century, the entry of immigrants in Brazil grew strongly. On one hand, Europe underwent a serious demographic crisis, which resulted in increased emigration; on the other hand, the final crisis of Brazilian slavery prompted Brazilian authorities to find solutions for the problem of work force. Consequently, while immigration until 1876 was focused on establishing communities of landowners, during this period, while this older process continued, immigrants were more and more attracted to the coffee plantations of São Paulo, where they became employees or were allowed to cultivate small tracts of land in exchange for their work in the coffee crop. This also coincided with the decreasing availability of better land in southern Brazil – while the German immigrants arriving in the previous period occupied the valleys of the rivers, the Italians arriving in the last quarter of the century settled the mountainous regions of the state.

During this period, immigration was much more intense: large numbers of Europeans, especially Italians, started to be brought to the country to work in the harvest of coffee. From 1877 to 1903, almost two million immigrants arrived, at a rate of 71,000 per year Brazil’s receiving structure, legislation and settlement policies for immigrants were much less organized than in Canada and the United States at the time. Nevertheless, an Immigrant’s Hostel (Hospedaria dos Imigrantes) was built in 1886 in São Paulo, and quick admittance and recording routines for the throngs of immigrants arriving by ship at the seaports of Vitória, Rio de Janeiro, Santos, Paranaguá, Florianópolis and Porto Alegre were established. The São Paulo site alone processed more than 2.5 million immigrants in its almost 100 years of continuous operation. People of more than 70 different nationalities were recorded.

In 1850, Brazil declared the end of the slave trade. This had different impacts on the different regions of Brazil. At the time, the region of São Paulo was undergoing a process of economic boom, linked to the expansion of the cultivation of coffee, and consequently needed increased amounts of labour. Other regions, notedly the Northeast, on the contrary, faced economic retraction, and were, consequently, able to dispense workforce. This entailed the replacement of the international slave trade by an internal or interprovincial slave trade, in which Northeastern slaves were sold in large numbers to the Southeast. This temporarily solved the workforce problem in São Paulo and other coffee plantation areas. However, by 1870 the paulista elite came to realise that the Northeastern slaveholders were in fact being able to obtain financial compensation for their slaves, or, in practice, an abolition with compensation. Fears of a situation comparable to the United States, with the division of the country into free provinces and slave provinces arose. Consequently, paulista politicians began to seek measures against the interprovincial traffic, at a time when, anyway, the price of Northeastern slaves was getting higher and higher, due to their increasing scarcity. By the beginning of the 1870s, the alternative of the interprovincial trade was exhausted, while the demand for workforce in the coffee plantations continued to expand. Thus the paulista oligarchy sought to attract new workers from abroad, by passing provincial legislation and pressing the Imperial government to organise immigration.

A poster used in Japan to attract immigrants to Brazil. It says “Let’s go to South America (Brazil) with the family.”

From 1904 to 1930, 2,142,781 immigrants came to Brazil – making an annual average of 79,000 people. In consequence of the Prinetti Decree of 1902, that forbade subsidised emigration to Brazil, Italian immigration had, at this stage, a drastic reduction: their average annual entries from 1887 to 1903 was 58,000. In this period they were only 19,000 annually. The Portuguese constituted 38% of entries, followed by Spaniards with 22%. From 1914 to 1918, due to World War I, the entry of immigrants of all nationalities decreased. After the War, the immigration of people of “other nationalities” redressed faster than that of Portuguese, Spaniards, and Italians. Part of this category was composed of immigrants from Poland, Russia and Romania, who immigrated probably by political issues, and part by Syrian and Lebanese peoples. Both subgroups included a number of Jewish immigrants, who arrived in the 1920s.

From 1931 to 1963, 1,106,404 immigrants entered Brazil. The participation of the Japanese increased. From 1932 to 1935 immigrants from Japan constituted 30% of total admissions. Prior to this yearly Japanese immigrants were numerically limited to no more than 5% of the current Japanese population. 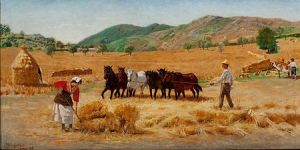 With the radicalisation of the political situation in Europe, the end of the demographic crisis, the decadence of coffee culture, the Revolution of 1930 and the consequent rise of a nationalist government, immigration to Brazil was significantly reduced. The focus shifted to culturally assimilating immigrants and “whitening” the population. From 1931 to 1963, 1,106,404 immigrants entered Brazil. The annual arrival of immigrants fell to 33,500. The Portuguese remained the most significant group, with 39.35%, The participation of the Japanese increased, becoming the second most important group, with 12.79%. Particularly from 1932 to 1935 immigrants from Japan constituted 30% of total admissions.

Immigration also became a more urban phenomenon; most immigrants came for the cities, and even the descendants of the immigrants of the previous periods were moving intensely from the countryside. In the 1950s, Brazil started a program of immigration to provide workers for Brazilian industries. In São Paulo, for example, between 1957 and 1961, more than 30% of the Spanish, over 50% of the Italian and 70% of the Greek immigrants were brought to work in factories.