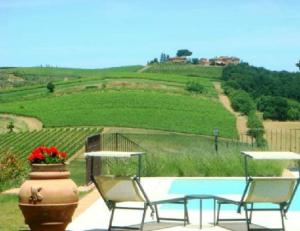 Fattoria di Palazzo Vecchio is a company that extends in the area of ​​Montepulciano ( Italy ) on 80 hectares of vineyard, arable and wooded lands , and is committed to ensuring the promotion and sale of high quality wines. Heir to a centuries-old history , the core of the farm developed since 1300 in the area of ​​the border between the Papal States and the Grand Duchy of Tuscany, and has witnessed great historical events including the drainage of the valley , a spectacular feat of engineering and hydraulics which occupied eminent personalities such as Leonardo da Vinci. In 1788 , thanks to another great drainage project lasted about a century , the valley became the healed area more fertile and rich in Tuscany. And it is precisely in this area, characterized by strong and clayey land , which is produced Vino Nobile di Montepulciano , one of the great Italian DOCG .

Initially owned by the Marquis ( Valian first , then Del Pecora , finally Ridolfi) , joined later by some institutions such as the Hospital of the Innocenti in Florence and the School for the study of agricultural called Capezzine . At the end of the 70s the core of the farm was bought by Count Riccardo Zorzi. After a phase of restructuring, in 1990, the Farm of Palazzo Vecchio began producing his first vintage of Vino Nobile di Montepulciano.

We had the opportunity to revel in them.

The Terra Rossa di Montepulciano DOC (2009 ) is a very dark Sangiovese whose features are freshness and a strong tannins , with notes of licorice and cherry. It is a wine that still has a lot of potential and it goes well with pasta dishes, meats and cheeses. The Red Earth combines quality and good price, becoming a workhorse of the production of Montepulciano.

The “Il  maestro”, Vino Nobile di Montepulciano (2010), in 1980 he was the first Italian wine to be awarded the mark of Denomination of Controlled and Guaranteed Origin DOCG , which ranks among the most prominent and popular Italian wines . Two years of aging for a rich and fragrant Sangiovese with a persistent and tannic flavour characterized by a woody tone .

Fattoria di Palazzo Vecchio offers to public the opportunity to taste these natural wonders in the ancient areas of the farm dedicated to hospitality, cooking , wine and natural beauty of Tuscany.