This is the first set of mural paintings to be discovered at Pachacamac near Lima, since 1938 by Belgians archaeologists from the Ychsma Project (Research Centre for Archaeology and Heritage, Faculty of Philosophy and Letters, Université libre de Bruxelles [ULB]), directed by Peter Eeckhout and Milton Luján Dávila. 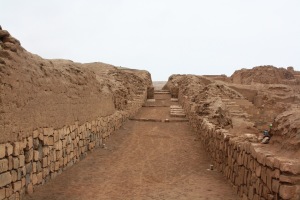 A series of polychrome wall paintings have come to light at the site of Pachacamac, on the Peruvian Central Coast. The Ychsma Project came across the paintings while studying a small mudbrick building that had never previously been explored by archaeologists.  The floor of the temple in which they were located is covered with various offerings. This is believed to be an abandonment ritual carried out following the Spanish invasion of the early 16th century.

According to the archaeologists, these finds attest to the long distance pilgrimages to the site that were

regularly undertaken during the Inca Empire. They may also indicate a very important set of offerings placed within and around the structure at the moment of its ritual abandonment following the Spanish invasion of the site in 1533. “In fact” says Peter Eeckhout, “several glass beads in the colonial style were mixed in with the offerings”. Several tombs and burial chambers were also excavated. “Some of these burials were ‘deviant’, while others clearly pertain to the elite. It will be fascinating to study these burials, and to compare the results with those of other interments recovered at the site in previous seasons” added Lawrence Owens, physical anthropologist for the Ychsma project.

Kusi Colonna-Preti, chief conservator for the project, states that: “only some motifs have been identified so far. The paintings were executed in red, yellow, black, blue and green, and were sometimes painted in multiple sequential layers, although it should be noted that earthquakes have considerably affected the stability of the structures. For this reason our first priority is to dedicate ourselves to conserving the remains, in accordance with our agreements with the Peruvian Culture Ministry and the Pachacamac Site Museum”.

The site is currently a candidate for UNESCO World Heritage Status listing.  The Ychsma Project is supported by grants from the ULB’s Research Centre for Archaeology and Heritage, from the ULB Foundation, and the National Foundation for Scientific Research.