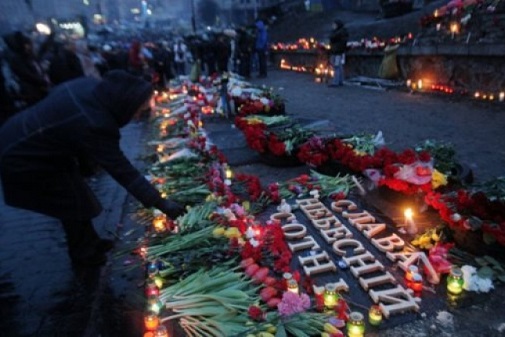 “Where are the results of the investigation?”- a conference held on Tuesday at the European Parliament in Brussels, initiated by MEPs Jiří Maštálka (GUE/NLG) from Czech Republic, and Tatiana Zhdanok (GUE/EFA) from Latvia, who called for establishing the truth and declare the official results of the investigation on the tragedy in Kiev, Ukraine, at Maidan square, often refered as the he Heavenly Hundred,  – Russian news agency ‘RIA Novosti’ reported.

Three years after the killings on the Maidan square, February 18-21 2014, when 100 peaceful demonstrators and policemen were assassinated, no official result of the investigation have been produced. The MEPs criticized the Ukrainian government for failing to conduct an independent, transparent and impartial investigation into this crime.

“Independent investigation is still not carried out”, – said the MP Tatyana Zhdanok, speaking at the hearing. Zdanok tried  to include the issue in the agenda of the European Parliament 17 times. “After the events in Odessa, I wrote a letter to  a head of European diplomacy, Baroness Catherine Ashton, from whom I received an answer that the incidents must be thoroughly investigated and the perpetrators brought to justice,” – said Zhdanok.

In the absence of official results of the investigation, she said, “we can only suggest who was interested in it.” “It is obvious that the tragedy on the Maidan was not in the interests of Ukrainian President Viktor Yanukovych and his government,” – Zdanok continued.

According Zhdanok colleague, MEP Jiří Maštálka, “someone really does not want to talk about it, and even more so to find the culprits and punish them. … On the part of the European Union these crimes have not been given thorough attention”, – he stated.