PUSS O'Brien visit to South Sudan, 24-25 April 2012 (Jamam refugee camp). Hehlan Umdan, 23, a refugee from Sudan (far left, pink dress), in the Jamam camp in South Sudan. She has three children and has been in the camp since November 2011. Oxfam water distribution point. 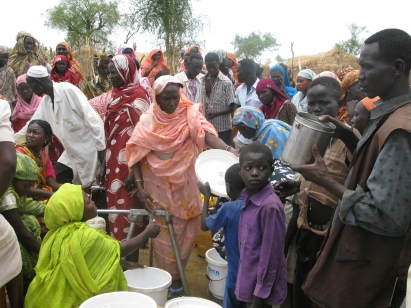 Deputy Prime Minister and Minister of Development Cooperation Alexander De Croo will allocate €3 million for the reception of South Sudanese refugees in the Democratic Republic of Congo and Uganda. The Belgian Development Cooperation will support a two-year programme of the United Nations High Commissioner for Refugees (UNHCR). In 2016, our country contributed a total of €21.4 million to the humanitarian work of the UN Refugee Agency.

Alexander De Croo: “The human suffering in South Sudan, which is one of the youngest countries in the world, is appalling. The South Sudanese political leaders’ responsibility in this respect is overwhelming. Their own self-interest takes priority over the safety of their 11 million compatriots. Given that the humanitarian needs are so pressing, I have decided to provide humanitarian assistance to the Congolese and Ugandan governments for the reception of the countless refugees. Hopefully in 2017 we will finally see the start of a lasting peace in South Sudan, after three years of war”.

The UNHCR will give priority to providing basic provisions for refugees, and to their safety. Additionally, it will focus on registration and encouraging self-sufficiency. The refugees will be housed among local communities in both countries, and not in camps.

Recurrent outbreaks of violence
The Republic of South Sudan, which obtained its independence in 2011, has been ravaged for three years by a civil war between government troops and opposition forces. A peace agreement was signed in August 2015, and as part of its implementation, a transitional government was formed in April 2016. However, violence flared up again in July 2016, with widespread violations of human rights, civilian deaths, rape and other forms of sexual violence, child conscriptions, looting and the destruction of civil and humanitarian resources. As a result, there was a drastic increase in refugee flows from South Sudan into the Democratic Republic of Congo, and especially Uganda.

Important humanitarian partner
The UN Refugee Agency UNHCR is an important humanitarian partner for Belgium. Every year, Belgium contributes €7.5 million to the UNHCR’s general funds. In 2016, various programmes were supported for refugees in Iraq, Jordan, Cameroon, the Central African Republic, Sudan, Mali and Mauritania, for a total amount of €11.625 million. In 2016, Belgium provided a total of €21.4 million in funding to the UNHCR.