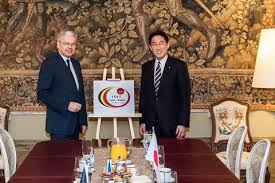 Belgium and Japan are celebrating this year the 150th anniversary of their diplomatic relations, established in 1866. The opening ceremony for this year of celebration was held  in the Egmont Palace. Deputy Prime Minister and Minister of Foreign Affairs Didier Reynders, Yoji Muto, Minister of State for Foreign Affairs of Japan, and Herman Van Rompuy, former President of the European Council and Ambassador for the friendship between our two countries, held the opening speeches.

The event highlighted what Belgium and Japan have in common. The importance of closer friendship ties was emphasized, an increase in exchanges in a number of broad areas was encouraged. During his speech, Minister Reynders stressed the intensity of the exchanges between our countries. He also insisted on the efforts being undertaken by Belgium to remain a safe travel and business destination and to fight the threat of terrorism, together with like-minded countries such as Japan.

Throughout the year, events and projects will be organised in Japan and Belgium to celebrate the friendship ties between the two countries. You can find more information on the events organized in 2016 via the following links: