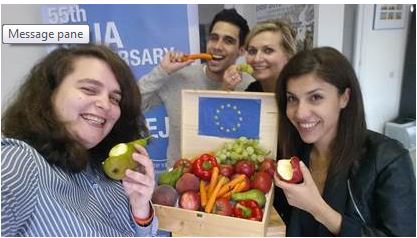 Following the Russian import ban on agricultural products from the EU, the European Council of Young Farmers has launched a social media campaign to urge people to buy and eat European perishable fruit and vegetables in an attempt to support farmers struggling with their decline in export sales following Russia’s import ban. The European Commission has been quick to introduce support measures for domestic producers, but vast numbers of farmers will still be negatively affected by Russia’s retaliatory measures.

CEJA is asking the general public, decision-makers, other stakeholders and farmers themselves to take selfies of them eating EU fruit and vegetables and spread the word on social media accompanied by the hashtag #veggieselfie. CEJA hopes that this will encourage people to go out and buy some EU fruit and vegetables but also to promote our products to markets outside the EU.

Take your own #veggieselfie and post it to CEJA’s Facebook page on www.facebook.com/cejayoungfarmers, Tweet it to CEJA on @_CEJA_ or email it to the office at allusers@ceja.eu