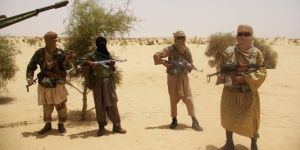 Israel’s ambassador to the United Nations has warned that the problem of foreign jihadists fighting in Syria is spiraling out of control.

“More than 10,000 foreign fighters have joined the fighting in Syria, and some of them have managed to return home and are spreading terror,” Prosor stated. “The citizens of the world should be aware that fundamentalist terrorists are moving from place to place,” Ron Prosor told a discussion in the United Nations General Assembly on the situation in Iraq.

The front – which analysts say is closing in slowly on Baghdad – highlights the phenomenon of terrorism being exported from Syria.

“The citizens of the world should be aware that fundamentalist terrorists are moving from place to place,” said Ambassador Prosor.

A French national, Mehdi Nemmouche, suspected of being the terrorist who killed four people at the Jewish Museum in Brussels on May 24, spent over a year fighting in Syria within the ranks of the Islamic State of Iraq and the Levant.

Jihadists from the ISIS terror group are reportedly threatening to invade Jordan and Israel after their recent victories in Iraq.

According to the Gatestone Institute, ISIS leader Abu Baker al-Baghdadi “recently discussed with his lieutenants the possibility of extending the group’s control beyond Syria and Iraq.”
This includes invading Jordan, which shares a long border with Syria and Iraq, and extends to Israel and Egypt.

“The ISIS terrorists see Jordan’s Western-backed King Abdullah as an enemy of Islam and an infidel, and have publicly called for his execution,” the Gatestone Institute said.

According to Israeli journalist Ron Ben Yishi, a military specialist writing in Yediot Aharonot, the take-over by ISIS in Iraq “signals the beginning of a new and dangerous stage in the turbulence rumbling through the Middle East in the last three years.”

“This is a stage that brings the entire area to the threshold of war between Sunnis and Shiites and between moderates and fanatics within the religious factions. Arab regimes fearing for their survival are still combating Al-Qaeda as well,” he wrote.