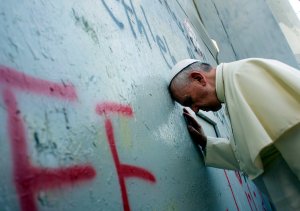 Ended the visit of Pope Francis in the Middle East, an opportunity to gather the faithful to prayer, and to facilitate dialogue not only between religious views, but also between States in the Holy Land.

Pope Francis arrived in Jordan on Saturday to start an intense three-day trip to the Middle East, bringing hope to the dwindling Christian population and an appeal to members of all religions to work together for peace. In his first official visit to the region, the Pontiff met with King Abdullah II and visited the site of Jesus’ baptism. After an other meeting with refugees from neighboring Syria and Iraq, Francis lauded Jordan for the “climate of serene coexistence” enjoyed by Christians and Muslims in the desert kingdom.

On sunday, the Pope has arrived in the West Bank to start the most politically sensitive part of his visit by going to the most important holy sites for Muslims and Jews in Jerusalem’s Old City, for the final step of his Middle East tour. Pope Jorge Bergoglio made ​​an unscheduled stop in the town of Bethlehem to pray ahead of the separation barrier that divides the Palestinian city from Israel. It was an unprecedented gesture which delighted Palestinians. They were also pleased that during his various addresses in Bethlehem, Francis used the term “State of Palestine”.“The time as come to intensify efforts and initiatives aimed at creating the conditions for a stable peace based on justice and the recognition of individual rights and security of all. It is time to put an end to a situation that is becoming increasingly unacceptable”, he said.  This pilgrimage provided an invitation to host the Israeli and Palestinian presidents for a prayer summit meeting at his apartment in the Vatican.

This was the first papal visit to the Palestinian territories since the November 2012, when United Nations’ General Assembly voted upgrading Palestine to a ‘Nonmember observer State’, giving it the same status as the Vatican. 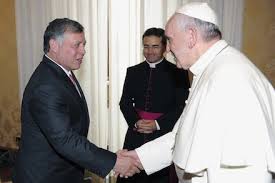