Brazil S/A comes to 2014 with more design. The idea is to show the diversity and increase the visibility of Brazilian design and generate business through export, services and actions longer matter between businesses and visitors, creating a bridge between companies and professionals in the design, architecture, decoration and crafts. Milan every year, receives several novelty from design and décor during the Fiera Internazionale del Mobile and the Fuori Salone which together in 2013 generated about 10.5 billion € of business. Brazil S/A is located in the heart of the Fuori Salone, close to the Duomo and this year the main roots of Brazil exhibition, curated by Adelia Borges celebrated the cultural diversity through exposure to different ” banquinhos de sentar ” typical stools that strongly characterize Brazilian culture.

For a long time the typical ” banquinhos de sentar ” ( stools ) are part of the brasilian material culture. Their origins are dated in 1500, when the Portuguese colonizers arrived in Brazil and were used for ritual uses in indigenous societies. The exhibition brings together some memorabilia of this fascinating universe . The idea is to celebrate the cultural diversity that strongly characterizes Brazil. In a multicultural country, where the roots of indigenous, African and European mingle and recreate, stools express this peculiarity . 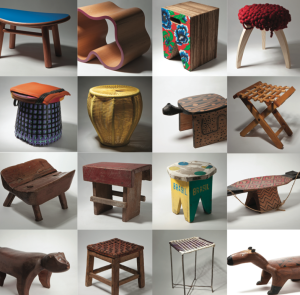 Football in Brazil was introduced by Charles Miller, a young Brazilian who, after having traveled through England, brought two balloons and began to try to convert the British expatriate community in São Paulo cricket players for football players, creating a soccer team in Brazil.

Football quickly became a passion for Brazilians, who often refer to the country as the “land of football.” According to research done by the Fundação Getúlio Vargas, football in Brazil has thirty million practitioners , approximately 16 % of the total population, 800 professional teams, 13 000 amateur teams and 11 000 federated athletes .

The Baccarat glassware one of the most renowned companies in the industry with 250 years old and known for its traditional crystal chandeliers, and the Antiquities Began which currently represents the Baccarat brand in Brazil, decided to honor the Brazilian football and the World Cup 2014 exposure ” Bola Brasil”.

Edited by Luiz Claudio Began, ten renowned creators of Brazilian architecture and decoration, were invited to put the classic crystal chandelier handmade French in collaboration with the Brazilian football, creating a new and curious gaze at the majestic chandeliers Baccarat, in a genuine dialogue between avant-garde and classical. The show combines the originality of the costumes in translucent fabrics at a point of contrast with the chandeliers polished by hand to reflect the sophistication and irreverence great Brazilian passion: football.

The “number 10 ” is an artifact of memory that elicits empathy as regards the cultural image of Brazil. This show tells the emotional dimension of the design because it features free associations about the love for a shirt. Any interpretation of the number 10 presented by the designers at the exhibition dates back to a continuous transformation of this memorial symbol of Brazilian football. The work presented here include the influence and perceptions that transfigure this shirts in addition to their function and use. These shirts are like football makes the Brazilian intangible heritage of cultural memories. There is an area on each side of the historical destiny that unfolds the way to be. The celebration of the 10 shirt allows you to remember not only the memory of the best Brazilian players, but also the memory of ways to interpret the differences. The number 10 is not only the best player, but a tradition of this spirit of the game. These shirts say how football was formed in Brazil through the assimilation of other cultures. Represents the social and cultural diversity of the infinite ways of being Brazilian and lives in the memory of those who play soccer with the soul .