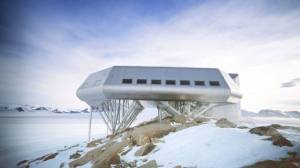 The first  group of the Belgian expedition headed to Antarctica left on Saturday from Brussels’ airport Zaventem. The polar station Princess Elizabeth will host 31 people – nine of them will be scientific researchers – during the three and a half month expedition. The group comprised of —- is led by the italian explorer and engineer Chiara Montanari, who was the chief of the expedition Concordia and is now at her 5th expedition to Antarctica.

Engineer, expert in Innovation Management, Knowledge Integration, Leadership e Team Building in extreme environment, Chiara has been Interface Manager for seven years and consultant on energetic saving strategies  at the Italian research basis in Antarctica. She also worked as Operations Manager in the UK in the innovation and digital start-up sectors and has a master in management at MIP, business school of  Milano Politecnico. A mix of experience, personal skills and acquire knowledge: these are the reasons for the Italian expert’s success.

Her group will do research on climate change and results are expected to clarify the arctic ice cap behaviour, the melting of the glaciers process and make predictions for the future within an year. Metrologic observations, atmospheric measurements and the movement of the earth croute will be studied in the station, too.

Alain Hubert, president of the International Polar Foundation, which  have normally had to participate to the research, was excluded from this expedition. “Belgians have the right to transparency  in politics” –  the Belgian state’s secretary Elke Sleurs (flemish-nationalist) affirmed referring to the existing conflict of interests in this issue and to the year’s 3.2 million euros budget to the project  – but he envisages a future collaboration with the international foundations.