Intrepid adventurers to Northern Ireland’s famous Causeway Coastal Route now have the opportunity to be suspended in mid-air above crashing waves on a spectacular cliff path over the wild Irish Sea.

The Gobbins, a dramatic, two-mile-long cliff-face walkway, has opened for bookings – and already people from Australia, America, Sweden, France and Germany are among those who have dared to get their ticket.

The magnificently restored Edwardian attraction features a series of tubular and suspension bridges, a staircase, caves and tunnels carved through the County Antrim basalt.

In all, walkers must brave 23 metal bridges and water-splashed gantries installed along sheer cliff faces.

Strictly for thrill-seekers and those who can handle a bracing climb, the route offers not just a walk along a cliff top but also below sea-level experiences of the caves and the bridges.

Glass tunnels let walkers traverse part of the Irish Sea in mid-air as they pass through the metal bridges and water-splashed gantries. 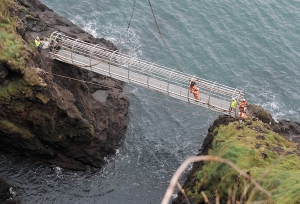 The Gobbins’ geologically diverse landscape is straight out of Game of Thrones and is actually in the vicinity of locations used in the filming of the hit TV show.

With access by guided tour only, the journey begins at a state of the art visitor centre, from where walkers are transferred to the cliff path by minibus. Tours begin on the hour from 10am to 3pm daily. The full excursion should take several hours.

Those not wishing to walk the path can still enjoy the stunning views and at the visitor centre learn about The Gobbins through an exhibition on the building of the path, its history from Edwardian times and the local geology and ecology. There is also a coffee shop and gift shop.

Only a 40 minute drive from Belfast, The Gobbins is in Islandmagee, a narrow peninsula just off the world-famous Causeway Coastal Route.

The area is an idyllic holiday spot and home to the Giant’s Causeway, the Glens of Antrim, Bushmills Distillery, miles of golden sand and loads of water-based activity.

The Gobbins was originally designed by visionary engineer Berkeley Dean Wise and built in 1902. Its name comes from the Irish An Gobain, meaning ‘the points of rock’.