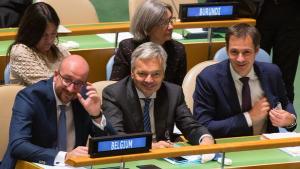 Belgian Prime Minister Charles Michel is representing Belgium at the 70th session of the UN General Assembly (UNGA). He has actively contributed to the discussion on gender quality, the sexual and reproductive rights, freedom of expression and opinion, decent work and naturally talked about how Belgium will aid in the development of least developing countries (LDCs) and the implementation of the agenda of Sustainable Development Goals (SDGs).

When the issue of terrorism arose, the head of the federal government said: “We have made progress, but the threat has not disappeared.” As pointed out by him, Belgium and France had their fair share of occurred attacks or attempted attacks in the past year alone as he recalled his interventions during the massacre in the Jewish Museum in Brussels and the attack in Verviers.

The preceding years have shown around 450 young people leaving the Belgium to join Jihad organizations, especially in Syria and Iraq. But the number has since fallen tremendously. According to Michel, the government has established a National Security Council and further fostered the security by condoning travel and recruitment for terrorism as a criminal offense and by expanding the special investigative methods. But in the end, the threat still exists.

The 70th United Nations General Assembly welcomed heads of state and representatives of civil society, as well as business and religious circles. US President Barack Obama launched an international coalition, composed of sixty nations, against Islamic State over a year ago and revved up the goals of the coalition Tuesday, September 29, 2015 at the UNGA. “We are determined to play our role in this coalition,” assure Charles Michel. The opening speech of President Obama emphasized on the realistic results of the coalition: “This is not a conventional war. This is a long-term campaign, not only against the terror network, but against its ideology. We must defeat their ideology. That does not happen with guns, but with better ideas.”