Belgian Prime Minister Charles Michel is representing Belgium at the 70th session of the UN General Assembly (UNGA). He gave a speech last Sunday, September 27 declaring that Belgium would designate 50% of their official development assistance (ODA) to least developing countries (LDCs). Belgium will also aid in the implementation of the agenda of Sustainable Development Goals (SDGs). This is a new agenda endorsed by world leaders during the General Assembly, to reach its goals by 2030.

Furthermore, Mr. Michel emphasizes on the mobilization of a “wide range of resources” to promote development: “It is indeed necessary to ensure domestic resource mobilization and effective use. They must be invested in education, social protection floors and healthcare systems for all.”. The private sector, according to the head of the federal government, should put more importance to one “key player” – the private sector aside from the authorities and government. 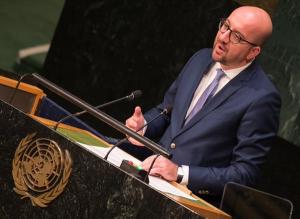 Other issues included in the speech were focused on the affirmation of gender equality, the sexual and reproductive rights, freedom of expression and opinion and decent work. Mr. Michel additionally declares the importance of the upcoming summit in Paris on climate: “We hope that Belgium will be present in Paris with clear commitments, not only in terms of reducing emissions, but also in terms of international financing.”